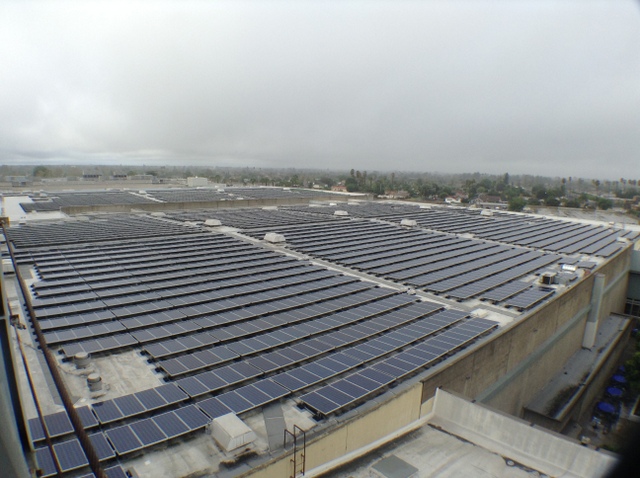 It was impossible to fit it all in one shot.

Maybe the coolest, or most appropriate, aspect of Solar Power International this year was the location itself — the Anaheim Convention Center — which is maybe the most eco-friendly and solar-friendly in the country. (The uncoolest, or most ironic, aspect was the single morning of rain Anaheim will probably see all year occurring on the day we were to head out and see the arrays up close.) 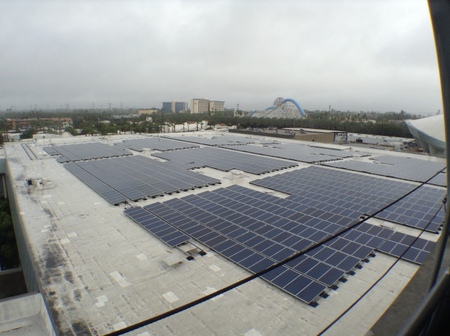 This is just one small part of it.

September marked the first anniversary of the convention center’s 2.4-MW ROOFTOP solar array (all caps added for emphasis). In its first 12 months of operation, the array has generated 3.6 million kWh of energy for Anaheim Public Utilities, powering more than 200 conferences and events. It is currently the largest city-owned solar installation on a convention center in North America, and will produce an estimated 108 million kWh over 30 years. The energy generated from the array helps Anaheim Public Utilities meet its Renewable Portfolio Standard, which requires it to procure 25 percent of its energy from renewables by 2016.

“The Anaheim Convention Center project is a perfect illustration of the benefits solar can provide to municipalities,” said Mike Hall, CEO of Borrego Solar, the project’s installer and O&M provider. “From the onset, the collaboration and cooperation between the utility, the on-site facility team and our technology partners at SunLink and Yingli were seamless.” 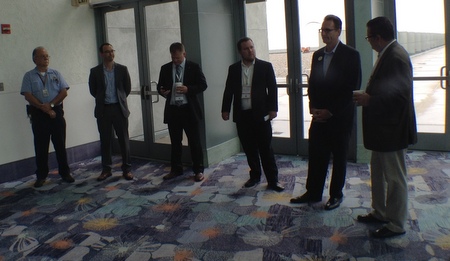 Everyone involved in this project discussed the unique challenges presented by a ballasted rooftop of this scale. SunLink CEO Michael Maulick (far right) said it was an “engineering nightmare,” which made trusting the engineers key.

The installation is truly massive to look down on, covering 300,000 sq ft of rooftop space over exhibition halls A, B and C (with talks of adding more). In talking with the project leaders, Borrego Solar, Yingli and SunLink, the engineering of a rooftop install of that size, in that location, was a huge undertaking. The array is mounted on SunLink’s Core RMS racking, a low-tilt solution developed to maximize energy harvest on flat rooftops. The system contains 7,908 Yingli Solar YGE-U Series panels that are specifically designed for large-scale projects.

The solar energy generated from the array is estimated to offset 4 million tons of greenhouse gas emissions annually.