The global solar tracker market is a fast-paced contest in which better designs help manufacturers win the next round of bids. Double-axis trackers are gaining momentum for space-constrained residential and commercial installations, yielding up to 45 percent more power than an equivalent fixed installation. Single-axis trackers, commonly used in utility-scale projects, are becoming more streamlined. Trackers have increasingly become more simple and easier to maintain with fewer motors, fewer parts and smaller foundations. Now, the market is gearing up for a host of advances in new tracker technology.

QBotix, a Pioneer in Solar Robotics

QBotix of Menlo Park, Calif., is a pioneer in the development of robotic tracking systems. In 2013, it introduced SolBot R-225, a mobile robot designed to position solar panels and collect data. It can manage 340 KW of solar panels, a 13 percent improvement over the SolBot R-200. SolBot R-225 is a monorail-riding, dual-axis tracking system that employs rugged, intelligent, mobile robots that aim solar modules toward the sun while adjusting their position throughout the day to maximize energy output. The QBotix system has many benefits. Because it employs a monorail, it can be used on rough terrains and hillsides. In addition, wires run through a conduit along the monorail so digging trenches for cabling is no longer necessary. 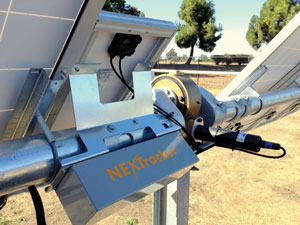 Last fall, NEXTracker, a Fremont, Calif., designer and builder of single-axis PV trackers, unveiled NEXTracker SPT, a self-powered utility-scale tracking technology that runs tracker motors and communications without wiring. The technology has many benefits, one of which includes reduced installation costs. The SPT’s design enables independent tracker rows to be driven with power from a single small solar panel with a backup battery. It can easily power an 80-module row. The trackers operate faster and more precisely, improving energy yield and enhancing safety with rapid stowing in changing weather conditions. NEXTracker also utilizes fewer foundations, uses less steel and has the ability to operate on hills with minimal site grading.

Exosun, the San Francisco-based supplier and designer of tracking systems for utility-scale PV plants, recently introduced intelligent tracking with SMARTracking, which is based on its popular Exotrack HZ horizontal single-axis tracking system. SMARTracking adds a high-tech component to the system. It begins with a three-dimensional topographical analyses that is used to determine the perfect height of each solar tracker to avoid panel-on-panel shading. The technology has been associated with an additional production of up to 5 percent more energy each year as compared to traditional single-axis trackers. For example, a solar project in France that was designed as a 7-MW plant, generated an additional 440 MW of electricity in one year. 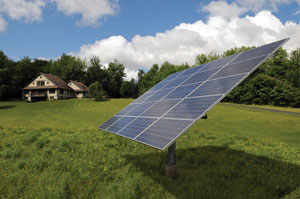 AllEarth Renewables of Williston, Vt., has designed a “complete pallet system” to simplify the shipping of its dual-axis solar tracker to the jobsite. Utilizing the rails of the tracker’s frame, the pallet system simplifies supply chain management and installation by including the entire tracker and materials necessary for complete installation, but it also reduces procurement time and the cost of sourcing materials. The pre-engineered system accommodates 20 or 24 modules for 5- to 10-KW-plus systems which includes free lifetime monitoring. Each tracker includes GPS and wireless technology to precisely follow the sun and maximize production. The company tests each of the tracker components before they leave the facility. It conducts accelerated wear testing, as well as full-scale wind tunneling testing. 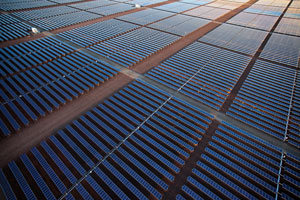 An established leader in the manufacture of solar tracking systems, Array Technologies has enhanced the design of DuraTrack HZ Solar Tracker, a single-axis tracking system that has fewer motors, structural material and parts per megawatt as compared to other tracking systems. The DuraTrack HZ recently surpassed the 2.8 GW shipped mark largely due to its unique and patented technology — a linked rotating gear-drive design. This rotating system does not transmit wind forces through the driveline, which frees up the need for additional structural material or parts. This lean mentality allows Array to continually expedite the construction of utility-scale solar plants by minimizing components, man hours to install and ultimately the cost to own and maintain the tracker. This value has been proven to project owners and engineering, procurement and construction contractors. 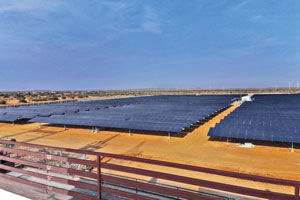 In March, SunLink Corp., completed its acquisition of the G10 Quantum Utility PV Tracker of ViaSol Energy Solutions, an Arizona company that manufacturers solar trackers. SunLink, of San Rafael, Calif., considered designing its own tracker, but found the ViaSol’s G10 tracker, now called SunLink ViaSol Tracker, had all the components it was looking for: advanced engineering design, innovative design and an installation track record that would translate into real-world success. The G10 Quantum Utility PV Tracker is a single-axis tracker that is a popular choice for large-scale, ground-mounted products. Using drive components that have been proven over decades in the heavy equipment industry, each of its power units drive up to 1 MW of solar modules. Competitive tracker systems require two to four times as many power systems per megawatt.