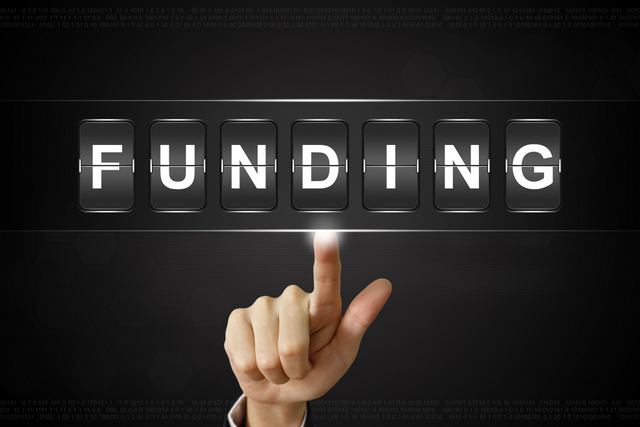 “Overall it was a good year for the solar sector considering the turbulence in the stock markets and trouble with yieldcos in the 2nd half of the year,” said Raj Prabhu, CEO of Mercom Capital Group. “The extension of the Investment Tax Credit (ITC) was a much needed boost for the sector, paving the way for a strong 2016.” 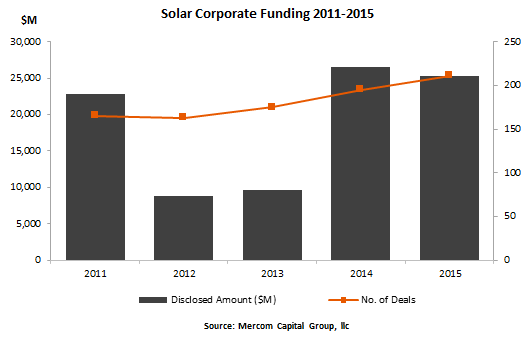 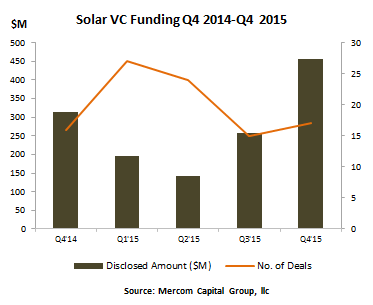 Solar downstream companies accounted for 69 percent of the VC funding in 2015, with $727 million of the $1 billion raised. Investments in PV technology companies came to $173 million and Balance of Systems (BoS) companies raised $87 million. Thin-film companies brought in $44 million, service providers raised $15 million, and the CPV and CSP categories each raised $3 million. Over $100 million in VC funding went to companies focused on off-grid markets in Africa, India, and South Asia.

RELATED: Average residential solar prices $3 to $4 per watt, commercial $2 to $3 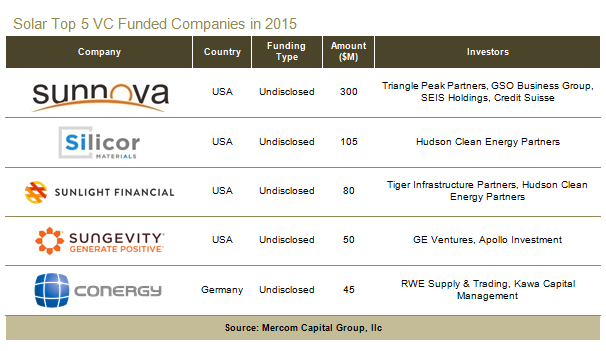 Despite a weak fourth quarter, public market financing had its strongest year with almost $6 billion raised in 38 deals, compared to the 2014 record of $5.2 billion in 52 deals. There were seven IPOs bringing in a total of more than $1.8 billion including Sunrun, Xinte Energy, CHORUS Clean Energy, SolarEdge Technologies and Grenergy Renovables. Yieldcos raised $1.1 billion in two IPOs, TerraForm Global Yieldco and 8point3 Energy Partners. 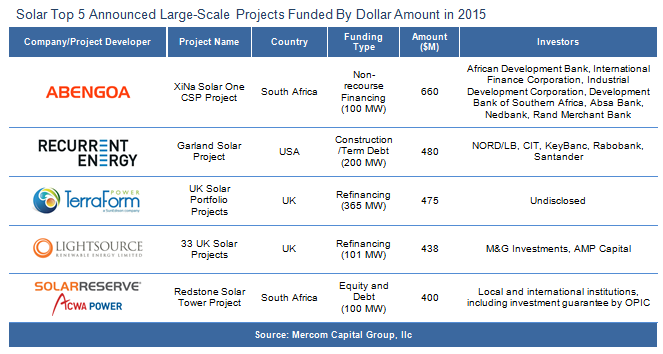 Top investors were Santander with 12 projects, Rabobank with nine projects and CIT Bank, Credit Agricole and KeyBank with six projects each.

It was a record year for dollars raised in residential and commercial solar project funds in 2015 with 23 funds announced for a combined total of $5.5 billion, compared to the $4 billion raised in 34 funds in 2014. SolarCity, Sungevity, Onyx Renewable Partners, Sunlight Financial, Brite Energy and Kilowatt Financial were top fundraisers in 2015.

Corporate M&A transactions in the solar sector in 2015 came to more than $3 billion in 80 transactions, compared to 116 transactions in 2014 for over $4 billion. Solar downstream companies had the greatest number of acquisitions with 49 transactions. SPI Solar acquired four companies and Global EcoPower acquired three companies. The largest disclosed transaction was the $1 billion acquisition of an 80 percent stake in Gestamp Asetym Solar from Gestamp Renewables by KKR, an investment firm. 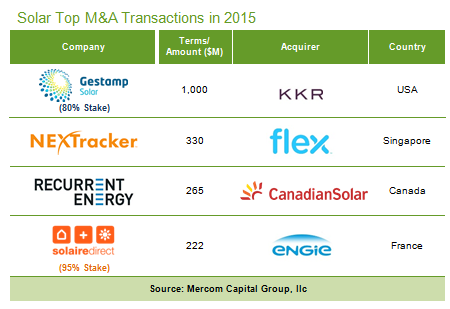