Ground-Mount Project of the Year: USVI Solar I 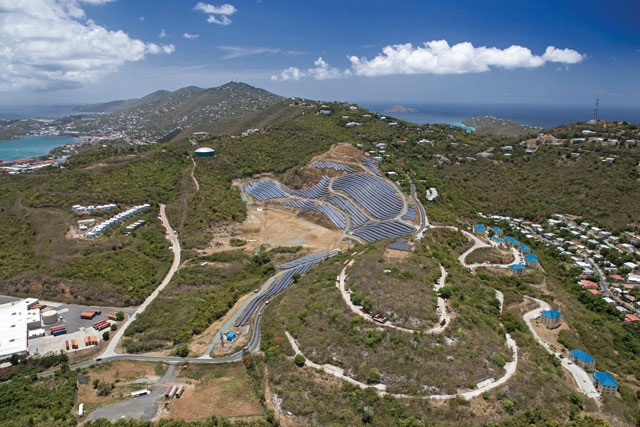 Daunting. That was the first word Sam Ley, energy systems engineer for AES Distributed Energy, used to describe USVI Solar I, our Ground-Mount Project of the Year. And really, we could have just printed that one word in bold, 72-point type near the photos and summed up USVI Solar I without telling the whole story. But let’s go ahead and tell it anyway.

Located on a rocky, overgrown steep hill that was freely available to the Virgin Islands’ Water and Power Authority (WAPA) because it was unusable for development, the USVI Solar I project required some serious engineering and patience to get online. But USVI Solar I is more than just a harrowing solar development war story as this project is hugely important for the 40,000 people living on the island.

In 2009, the U.S. Department of Energy reported that the Virgin Islands was almost 100 percent dependent on imported oil for electricity, water desalinization and transportation, resulting in electricity costs that were nearly four times the U.S. national average. Since the Hovensa oil refinery closed in 2012, WAPA has utilized expensive, polluting diesel generators for electricity. Now, WAPA has a new vision for generating renewable energy and stabilizing its grid with the goal of reducing fossil fuel use by 60 percent by 2025.

This 5-MW PV plant is the largest PV plant in the U.S. Virgin Islands and is expected to generate approximately 7.9 million kWh of electricity annually — which is about 10 percent of the island’s energy needs and provides lower-cost energy to WAPA at a fixed rate. And none of it would be possible without the right screw.

Ley and his team thought of a few ways to approach the site initially — from terracing the site and doing a ton of civil work, to mostly leaving it as is. They ended up doing a minimal amount of civil work and adapting the racking to the existing contours of the land. This required additional flexibility from their plan and the system architecture because thick patches of shrubbery obscured a lot of those contours. In addition, some areas of the site were dirt and other areas were exposed bedrock. 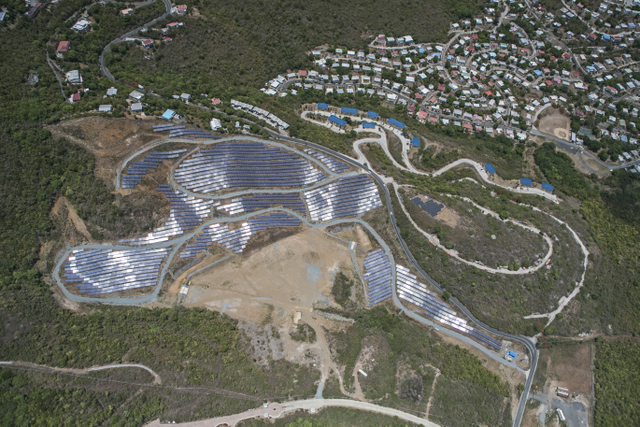 “We started by cutting out roads to access areas of the site, and then taking our original layouts and adapting them as we approached each section of the site to add and remove racks,” Ley says.

RBI Solar supplied the racking and also engineered and sourced a ground screw that was able to both dig and hold in soil or dig into the bedrock, jam into the cracks and affix itself there.

“This is a site where it’s difficult to draw what you think will happen, and then have it happen,” Ley says. “Literally as they are drilling in a screw that didn’t take, or if there is a small change in topography, they’d X out a rack and figure out where else to put it.”

Since the layout had to change considerably as the project progressed, the electrical architecture had to be easily adjusted. To that end, AES chose KACO 32- and 50-kW string inverters.

“As we were moving and shuffling racks around, we had inverters spread all over, so it was easier to adjust the stringing maps and inverter assignments as we built,” Ley says. “If the design was too rigid, it wouldn’t have been able to accommodate those changes in the field.”

Ley admits that as much as they prepared for on-the-fly field changes, the amount of flexibility they needed was more than anticipated.

Blame it on the rain

Construction started in earnest in late spring 2014 and started to look like a PV project by early fall. The civil work took a little longer than anticipated, which drug construction into hurricane season. Hurricane Cristobal was unkind.

“We were caught right before the main storm water improvements were ready to go,” Ley says. “Quite a bit of erosion and a tremendous amount of rework had to be done.”

But obviously this was not a unique event. This area is known for heavy rainfall and winds that can approach 195 mph. So, while being hunkered down in a storage container during a storm that produces 2 in. of rain in 24 hours sounds less than ideal, the storm provided the perfect case study for testing the team’s initial water management plan.

“We had an initial comprehensive plan, but like most plans on this project, the plan came crashing into reality. A lot had to be revised,” Ley says.

After individual rain events, whole sections would need to be reworked: erosion would develop too quickly, sections of racking would need supplemental concrete, roads needed rebuilt, lots of additional new drainage paths needed to be created.

“It turned into an empirical process,” Ley says. “The regional EPA has been using some of the results and methods they’ve seen us doing on site as a model for other sites that they are bringing up in similar climates, where the rainfall is high and the soil is prone to erosion.” 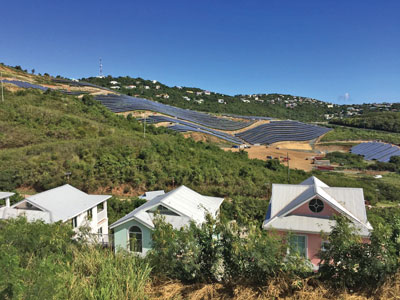 The USVI Solar I plant will support 10 percent of the island’s energy needs.

The distributed design of the project and the selection of string inverters came with several benefits. One is administrative. The system was partially financed by 18 treasury grant applications under the Investment Tax Grant finance structure, which means, electrically speaking, this one project had to be 18 somewhat distinct electrical sub-systems. That wouldn’t be possible with central inverters.

There are the practical benefits as well. For one, an island like St. Thomas presents logistical obstacles. Getting a 5,000-lb centralized inverter from customs to the site could take weeks to line up. Secondly, string inverters provide more flexibility, which is hugely valuable for site planning and grid stability. The St. Thomas grid is small and stiff but fairly resilient. But the USVI Solar I plant is its first excursion into renewable supply, and there are not a lot of sophisticated grid controls.

“I would have been nervous about putting large, heavy pad-mounted equipment there,” Ley says. “The site is going to move over time. We are going to be adjusting things — an O&M procedure there is just to continue to maintain the drainage systems on the site. And having to do that with 5,000-lb central inverters on huge slabs is not something I’d want to contemplate going back through again.”

Specifically, 96 separate inverters are connected to 10 transformers. Since the array is located in an area prone to hurricanes, the smaller inverters will allow the site to remain online in the case of external or equipment faults.

As mentioned, USVI Solar I was certainly daunting, but in 2015, daunting solar projects are still doable — and, after completion, pretty damn impressive.