SimpliPhi Power wins another award for its High-Output Battery

SimpliPhi Power was named the winner of a Gold Stevie Award in the Energy Industry Innovation of the Year category for The 14th Annual American Business Awards. SimpliPhi’s new High-Output Battery was recognized by the Stevie Award committee along with the company’s evolution beyond the entertainment industry, leveraging its proprietary platform technology to provide its energy storage solutions to residential, commercial, military, emergency response and mobile markets. This award comes on the heels of SimpliPhi winning the Silver Edison Award for Energy & Sustainability in late April.

Last year the company made key additions to its leadership team and expanded into European and Asia Pacific markets. It also rebranded to more effectively articulate the value of our power storage solutions for consumers. 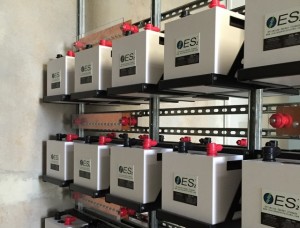 “SimpliPhi excels at safe, non-toxic energy storage solutions in a wide variety of applications, and this honor is shared with the entire SimpliPhi team,” said SimpliPhi CEO Catherine Von Burg. “Especially our founder and CTO Stuart Lennox, who innovated a portfolio of energy storage products that introduced a whole new model of access to power that went beyond the limits of transmission lines. These products also optimize any power generation source to facilitate the transition to a renewable energy economy and provide non-toxic, efficient and robust access to power, anytime, anywhere.”

The SimpliPhi High-Output Battery, launched to the market in 2015, was designed to address the Marine Corps requirements for a high-output battery that could provide a sustained peak power output of 10 to 15 minutes without any risk of overheating, thermal runaway, fire or shutting down, as well as longer duration base power delivery over 20 or more hours. The High-Output Battery can also be used in commercial markets to save money on costly utility demand charges and for longer durations in off-grid or blackout scenarios. The battery architecture creates minimal electrical impedance, so SimpliPhi’s batteries do not have a thermal profile that requires temperature management or cooling, and have never suffered dangerous thermal runaway or fires. Such sophisticated design allows for one unit to provide both peak and long duration power, while also being modular, scaleable, non-toxic and safe.

The American Business Awards are the nation’s premier business awards program. All organizations operating in the U.S. are eligible to submit nominations – public and private, for-profit and non-profit, large and small. Nicknamed the Steviesfor the Greek word meaning “crowned,” the awards will be presented to winners at a gala ceremony at the Marriott Marquis Hotel in New York on Monday, June 20. Tickets are now on sale.

More than 3,400 nominations from organizations of all sizes and in virtually every industry were submitted this year for consideration in a wide range of categories, and over 250 professionals worldwide participated in the judging process to select this year’s Stevie Award winners. Details about The American Business Awards and the list of 2016 Stevie winners are available at www.StevieAwards.com/ABA.