PSEG Solar Source today announced the commercial operation of the 25.2 MW DC (19 MW AC) Queen Creek Solar Farm in Queen Creek, Ariz. Salt River Project (SRP) has a 20-year agreement to acquire all of the solar energy generated by the project and has begun accepting power from the plant. 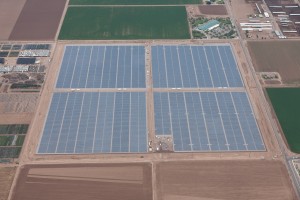 The solar plant, located on 148 acres of land approximately 30 miles southeast of Phoenix, contains approximately 90,000 crystalline panels operating on a single axis tracking system. It is owned by PSEG Solar Source, a subsidiary of PSEG, a diversified energy company based in New Jersey. juwi solar Inc. (JSI) developed the project, served as EPC contractor and will provide operation and maintenance services for the project.

“We are pleased to be providing clean, solar energy to Salt River Project,” said Diana Drysdale, president, PSEG Solar Source. “Arizona has the attributes we look for when choosing a project — good sun, a receptive regulatory environment and supportive local officials. It is exciting to be adding Arizona to the list of states where we have operational solar facilities even while we are beginning construction on an additional site in Delaware.”

The solar power generated by the project offsets approximately 21,000 metric tons of CO2 emissions each year, the equivalent of taking approximately 4,100 cars off the road.

The plant, which will produce an amount of energy equal to that needed to serve about 3,300 SRP customers’ homes, requires no water and supports development of the solar energy industry within Arizona.

“As we look for ways to diversify our portfolio, it’s also important that we continue to invest in the state and the local economy,” said SRP General Manager Mark Bonsall. “Queen Creek Solar not only provides our customers with clean energy, but it’s also a resource that is located right here in Arizona.”

SRP is the third-largest public power utility in the nation, serving nearly 950,000 electric customers in the greater Phoenix metropolitan area.

“juwi solar is excited that the Queen Creek solar project is now energized and producing power on a commercial basis. The state of Arizona has tremendous natural resources that make projects like this prosper,” said Michael Martin, CEO of juwi solar Inc. “Organizations like SRP and PSEG Solar Source provide shining examples on how to positively impact the economic future of the solar industry. Having completed our roles as developer and contractor, we are very pleased to remain involved with the project through our ongoing operations and maintenance services.”

PSEG Solar Source owns four additional solar projects all of which were built by JSI: