Ideal Power, a developer of advanced power conversion technologies, released a white paper to coincide with the release of a new power semiconductor switch called the Bi-directional Bipolar Junction TRANsistor (B-TRAN) that the company believes will now be a replacement for conventional power switches. Ideal Power was granted five U.S. patents for the B-TRAN (more pending) and its method of operation, and the white paper provides some serious details to explain it all. 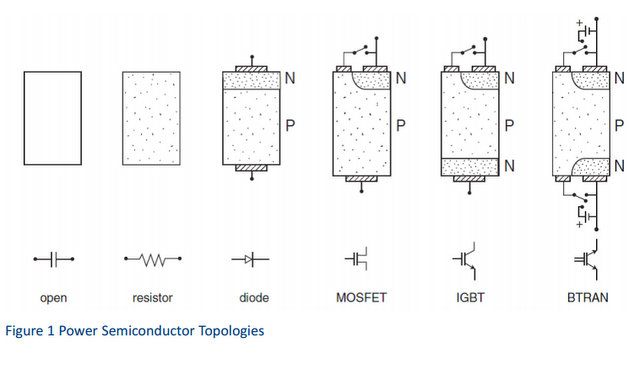 The B-TRAN’s double-sided switch arrangement enables a kind of hybrid operation, where the device may behave as a MOSFET while turning off and as a diode, IGBT, or bi-polar transistor while on.

The B-TRAN device has a simple, 3 layer, 4 terminal, vertically symmetric double-sided structure that presents unique opportunities for high current density operation at high efficiency. B-TRANs have potential uses in a wide range of power conversion and control applications, including very low loss AC power control and in power converters from Ideal Power and other power converter OEMs. Based on a recent study by Yole Development, power semiconductor switches are a $10 billion per year addressable market currently served by conventional devices such as Insulated Gate Bipolar Transistors (IGBTs).

“Given the performance predictions for this new power switch topology, the B-TRAN may be the most significant new type of power semiconductor since the introduction of the IGBT,” says Richard Blanchard, a B-TRAN co-inventor and holder of over 200 patents primarily related to power semiconductors including the widely used trench MOSFET.

In the white paper, Ideal Power starts by describing typical semiconductors and how they compare to the B-TRAN. Take the IGBT. With IGBTs, Ideal Power says there is an inherent conflict between low on-state voltage drop and turn-off time, with longer turn-off times causing higher switching losses.

“IGBT development therefore concentrates on minimizing this trade-off between conduction losses and switching losses. A note – most, if not all, IGBTs are made with the doping polarities opposite of that shown (PNP rather than NPN), but the operating principles are the same.”

The B-TRAN on the other hand has the same three-layer PNP or NPN structure of the IGBT, but has a control switch on each side.

This double-sided switch arrangement enables a kind of hybrid operation, where the device may behave as a MOSFET while turning off and as a diode, IGBT, or bi-polar transistor while on. It also has identical behavior in each direction, enabling it to block voltage or conduct current in each direction with equal performance.

Third party simulations show that, when applied to AC power control, the B-TRAN is predicted to operate with less than 20% of the conduction losses of conventional solid state AC power control devices while providing valuable fault control capabilities such as current limiting and fast turn-off during fault conditions, which are lacking in such conventional devices. The B-TRAN could also potentially replace electro-mechanical contactors in many applications where fault limiting and explosion-proof operation is required.

And obviously Ideal Power has conducted a ton of research into the B-TRAN’s operation, most of which is detailed in its white paper. Be sure to give it a read.