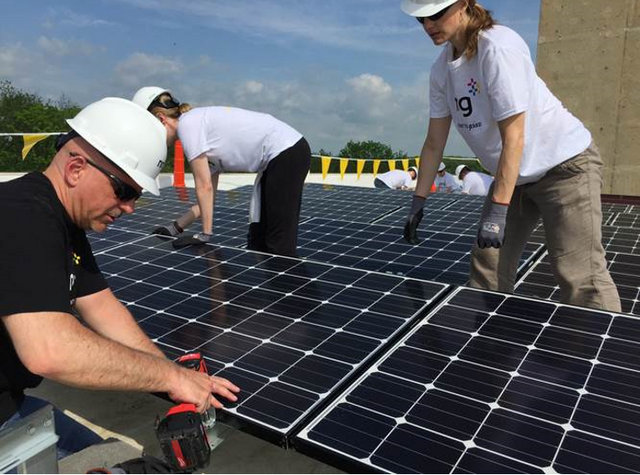 NRG Energy is a pretty cool organization that tries to mix in some charitable good to complement the positives of installing renewable energy solutions. And they even invite fun people, like NFL linebackers, to come along on an installs.

The latest news comes from NRG Global Giving, which joined forces with HomeFront, a social services non-profit in Central New Jersey, to unveil a newly installed rooftop solar array at the future site of HomeFront’s new headquarters in Ewing, N.J. Slated to open in September, the location will be a one-stop social services campus helping families across the region get back on their feet.

The 84 kilowatt solar array, made up of nearly 300 photovoltaic panels, will generate about 50% of HomeFront’s electricity usage in the form of clean, renewable electricity from the sun.

“NRG is thrilled to provide a path for HomeFront to utilize clean energy in order to save on energy costs and reinvest in important programs benefitting New Jersey families,” said Tanuja Dehne, NRG’s Chief Administrative Officer. “At NRG, we are not only working to transform the energy industry – our employees are also working to improve the quality of life for customers and our neighbors.”

The rooftop solar array was donated by NRG Global Giving, designed by NRG Home Solar and installed by more than 30 NRG employee volunteers. At an event today in Ewing, NJ, held at the future site of the HomeFront Family Campus, representatives from NRG and HomeFront celebrated a partnership that will allow HomeFront to take part in the renewable energy movement and power its new headquarters with solar.

“We are incredibly proud to electrify the array this week and join NRG to ‘flip the switch’ and begin producing renewable power,” said Connie Mercer, Chief Executive Officer of HomeFront. “Our partnership is a fantastic example of the private sector and a nongovernment organization working together toward a common goal: making our world a better place, one family and one solar panel at a time.”

In addition to cost savings, the solar array will serve as a learning lab for HomeFront client families, educating them about the power of renewable energy and its potential to provide electricity choices for homes, businesses and non-profits. For NRG employees, the installation was a great hands-on experience to better understand an important part of the company’s business.