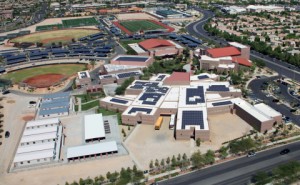 Although Faith Lutheran launched its solar installation in 2011, with a 100-kW array on the roof of a classroom and administrative building, the project blossomed in October when the school installed more than 900-kW of SolarWorld solar panels on its student center, maintenance facility and atop a 341-space carport structure custom-engineered by Bombard Renewable Energy. Faith Lutheran administrators expect to offset about half of the school’s annual power needs with clean energy generated by the array and save about $140,000 a year on utility costs.

The project was funded through NV Energy solar rebates and the Federal Renewable Energy Investment Tax Credit. Bombard Renewable Energy will own, operate and maintain the solar array for five years under a power purchase agreement with Faith Lutheran.

“This project helps reduce our energy costs and provide covered parking for our faculty and students, but more importantly, it allows Faith Lutheran to be among the leaders in clean energy in southern Nevada,” said Dr. Steve Buuck, Faith Lutheran’s chief executive officer.

“Ever-growing energy needs, supportive state policies and, of course, some of the most abundant sunshine in the country combine to make solar an attractive investment for both nonprofit and for-profit businesses in Nevada,” said Kevin Kilkelly, president of SolarWorld Americas. “We are pleased to help meet that demand with SolarWorld’s high-quality, American-made solar panels and, thanks to our installation partner Bombard Renewable Energy, 100 percent local labor.”

Bombard Renewable Energy became a SolarWorld Authorized Installer in 2012. The company has installed more than 50 MW of solar systems in and around Nevada, including dozens for nonprofit organizations and schools. “Although Nevada’s massive utility-scale developments often grab the headlines, the state also ranks among the top 10 in the U.S. for commercial solar installation,” said Chris Brooks, director of Bombard Renewable Energy. “Faith Lutheran School, with its dual emphasis on a financial and environmental bottom line, is representative of the kinds of businesses and institutions embracing solar in growing numbers across the Silver State.”