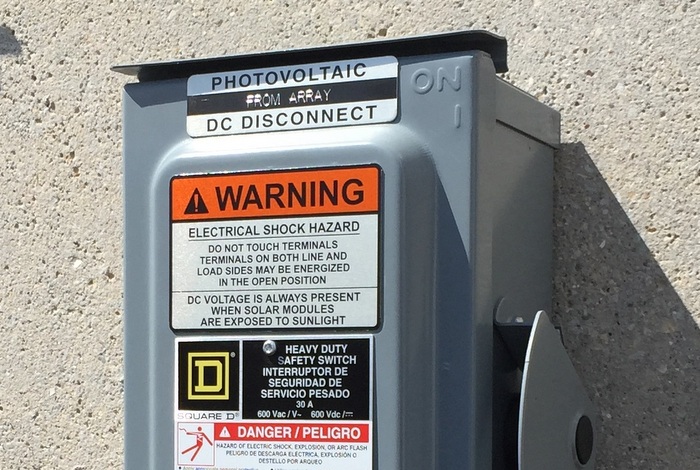 Many changes are occurring with labeling requirements covered by Article 690 as we move toward the release of the NEC 2017 code revision. PV systems grow and evolve, and the required labeling must change with them to ensure safe and informative installations. Like any evolving process, input from many sources is required to gain a better understanding of what works and what does not, so the process of change can proceed in a way that makes sense for everyday use in real world applications.

Code Making Panel 4 of the NEC 2017 has reviewed hundreds of public inputs. Each suggestion is weighed, reviewed and compared to other similar requests and then voted up or down based on all relevant data and substantiations. Many suggestions were for improved labeling. The panel has addressed a number of inputs; some of the changes are outlined in this article. 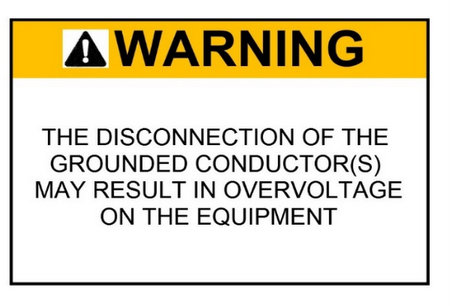 Making changes that are relevant to existing and future systems is important. Part of the effort has involved addressing labeling efficiency and eliminating or reducing labels that no longer serve a valid purpose. For instance, certain labels are no longer considered necessary, such as the bipolar label listed under 690.7(E)(3) from the NEC 2014 code. Disconnection of the neutral cannot result in overvoltage of the array, since the ground-fault detection system is required to separate the array into two distinct arrays during fault conditions; therefore, condition 3 is unnecessary. 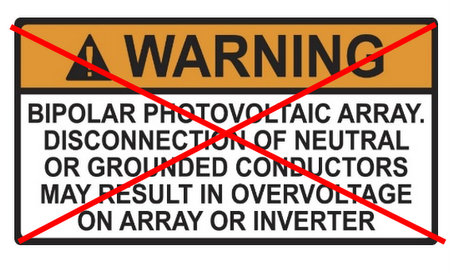 To make this more relevant, the NEC 2017 Article 690.31(I) will now indicate that a new label shall be used to clearly mark bipolar PV systems with a warning notice indicating that disconnecting the grounded conductor(s) (not the neutral) could result in overvoltage of the equipment.

Originally, the NEC 2014 Article 690.35(F) marking requirement was seen as necessary for electricians, based on thinking that ungrounded conductors were somehow unsafe. 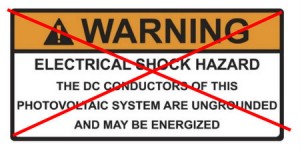 That has never been true, and so the requirement for this marking will be eliminated, reducing the number of labels required on a PV system and simplifying the labeling process even more (Fig. A).
Speaking of simplifying labeling, the following labels are still required, but the words “DO NOT TOUCH TERMINALS” have been removed. This is found in 690.17(E) of the NEC 2014 code, but will be found in 690.13 (B) of the NEC 2017 revision (Fig. B). 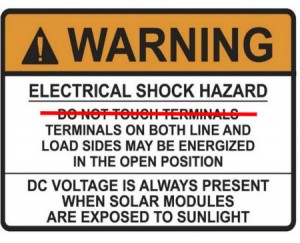 As of the first draft revision of NEC 2017, 690.53 has changed to simplify the required power information. The examples on pg. 36 show what was preserved in the current code text while also showing what was eliminated or changed (Fig. C).

The following label already exists in Article 690.55 of the NEC 2014, but the language was clarified slightly so that the new NEC 2017 code now reads: “Energy storage systems shall be marked with the maximum operating voltage, including any equalization voltage. If solidly grounded, grounded circuit conductor shall be marked to indicate the polarity.” 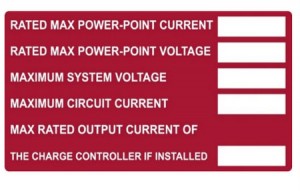 The previous code revision simply indicated: “Photovoltaic power systems employing energy storage shall also be marked with the maximum operating voltage, including any equalization voltage and the polarity of the grounded circuit conductor.”

provision. Many systems do not have grounded conductors, so the provision in NEC 2014 did not make sense. Also, other marking requirements in 690.31(B) require general markings that include polarity, making this polarity marking requirement redundant.

Fig. C: In these examples, power requirements were simplified.

used 99 percent of the time.