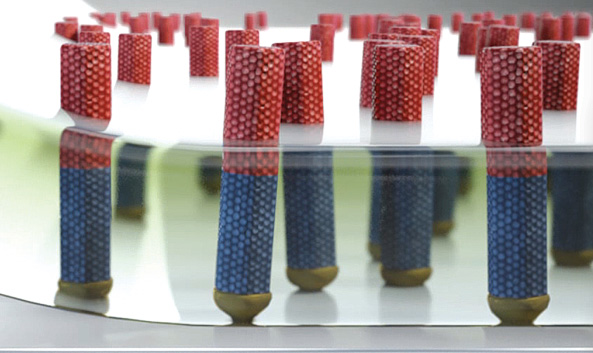 In what could be a major breakthrough for solar energy, Swedish advanced materials start-up Sol Voltaics AB has confirmed the successful alignment and orientation of nanowires in a thin film. The achievement paves the way for photovoltaic (PV) module efficiencies of 27 percent or more — a 50 percent boost in energy conversion efficiencies for today’s solar modules.

While showing highly promising characteristics in solar energy generation, nanowires are notoriously difficult to align due to their high aspect ratios and material characteristics. By controlling nanowire orientation and alignment at centimeter scale on standard-sized wafers, Sol Voltaics has taken a major step toward the commercial production of solar films for tandem solar PV modules.

“Today’s announcement marks a significant moment for both Sol Voltaics and the global solar energy industry,” said Erik Smith, CEO of Sol Voltaics. “Gallium arsenide (GaAs) nanowires have recently come to the forefront as holding great promise for boosting solar module efficiencies well beyond current levels. By aligning nanowires within a membrane, we’ve taken our greatest stride yet toward manufacturing solar nanowire films at the commercial scale. This will enable solar panel manufacturers to greatly enhance the energy-generating capability of their products.”

The latest milestone follows Sol Voltaics’ 2015 announcement that the Fraunhofer-ISE confirmed a world-record PV conversion efficiency of 15.3 percent for the company’s epitaxially grown GaAs nanowire solar cells. The cells were recently retested by Fraunhofer and showed little or no degradation nearly 18 months after the initial tests, reaffirming the technology’s performance reliability.

“We have made several significant advancements over the past few quarters, and that momentum continues on several fronts,” added Smith. “Realistically, we have a few remaining hurdles to get over in order to get into commercialization but we’re very confident we can deliver a truly transformative energy solution, the kind of solution called for by the Breakthrough Energy Coalition, COP 21 summit, and other global efforts to combat climate change and create a clean energy economy.”