Mercom Capital Group LLC, a global clean energy communications and consulting firm, released its report on funding and merger and acquisition (M&A) activity for the solar sector in the third quarter of 2016. Total corporate funding, including venture capital, public market and debt financing into the solar sector in Q3 2016 was up to about $3 billion in 45 deals, compared to the $1.7 billion in 32 deals in Q2 2016.

“Funding levels bounced back across the board compared to a weak Q2, but they are still well below last year’s totals,” commented Raj Prabhu, CEO and Co-Founder of Mercom Capital Group. “The combination of slower than expected U.S. demand, the overcapacity situation coming out of China, and global hyper-competitive auctions leading to lower margins has affected the entire supply chain and most of the solar equities are in the red year-to-date. The exception has been the rebound of some of the yieldcos.”

Global VC funding (including private equity) for the solar sector almost doubled in Q3 2016 with $342 million in 16 deals compared to the $174 million raised in the same number of deals in Q2 2016. 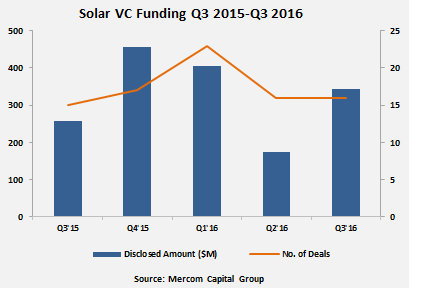 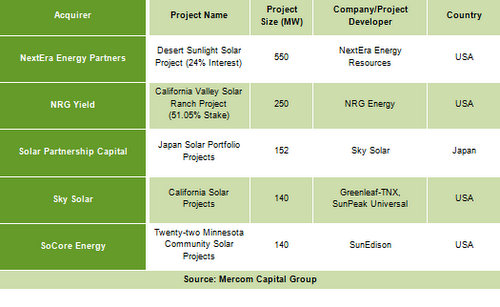 The top large-scale project funding deal this quarter was Magnetar Capital’s raise of $397 million to refinance its 135 MW UK solar projects portfolio. Sinogreenergy raised $200 million to develop a portfolio of up to 550 MW of solar projects in Taiwan. SunPower secured a $199.7 million syndicated loan for its 100 MW Pelican Solar Project in Chile. Gunkul Engineering secured $115.8 million in a syndicated loan for the construction of the 31.75 MW Sendai Okura solar project in Japan. Fotowatio Renewable Ventures received $103.4 million in project financing for the 50 MW solar PV project in northern Jordan. 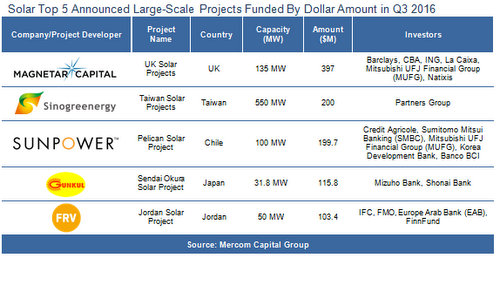 There were 18 solar M&A transactions in Q3 2016 compared to 17 in the previous quarter. Solar downstream companies accounted for half of the transactions (nine), followed by manufacturers with five. Four acquisitions involved SunEdison companies this quarter as a result of the company filing for bankruptcy and selling off parts of its business. 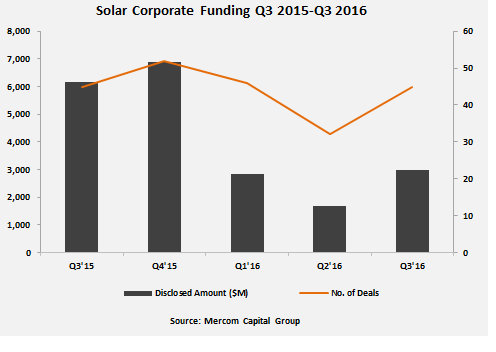