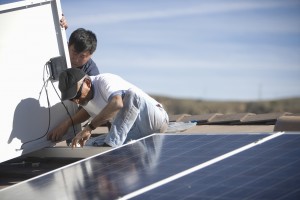 EL SEGUNDO, Calif. – Total global solar photovoltaic (PV) capacity is forecast to reach 498 gigawatts (GW) in 2019, which is 177 percent higher than 2014, according to the industry analyst group IHS. While total global solar PV demand is projected to grow steadily, the large number of discrete country markets at the gigawatt-level will help reduce demand volatility.

“Last year, the market began to shift toward a more supply-driven market, characterized by high utilization rates, following the more demand-driven market that led to PV manufacturing consolidation,” said Susanne von Aichberger, solar industry analyst for IHS Technology, formerly Solarbuzz. “This trend is expected to continue through to 2019, when the utilization rate at module production is projected exceed the peak utilization rate reached in 2010, when the global market experienced explosive growth.”

Based on findings of the latest IHS Marketbuzz report, global solar demand is expected to reach 75 GW in 2019, which is 66 percent higher than in 2014. Last year, the largest global markets were China and Japan, which together accounted for half of total demand. The United States, U.K. and Germany together accounted for another quarter of total demand.

“In the five years between 2015 and 2019, IHS expects that 11 global markets will exceed the average annual demand level of 1 gigawatt,” von Aichberger said. “This large number of country markets reduces the risk of another explosion in the global PV market and of an overly strong capacity build-up. An increasing number of markets are entering the post-feed-in-tariff phase and embracing the integration of PV into the electricity market, which will help the market to avoid boom-and-bust situations.”

Average selling prices (ASPs) of standard c-Si modules (i.e., c-Si excluding Super Mono) are forecast to decline by 27 percent between 2015 and 2019, reaching $0.45 per watt (W). The share of thin-film modules produced is projected to decline from 8 percent in 2014 to 7 percent this year — the lowest share recorded since 2010, when c-Si module shortages opened the door for thin-film technology to reach a production share of 15 percent.

Due to the expected supply-driven market situation, the share of thin film is projected to remain at 7 percent through 2019. Within the thin film category, growth is likely to be driven by cadmium telluride (CdTe) and copper indium gallium selenide (CIGS). By 2019, annual production of a-Si modules is projected to fall to less than half of its 2014 level.