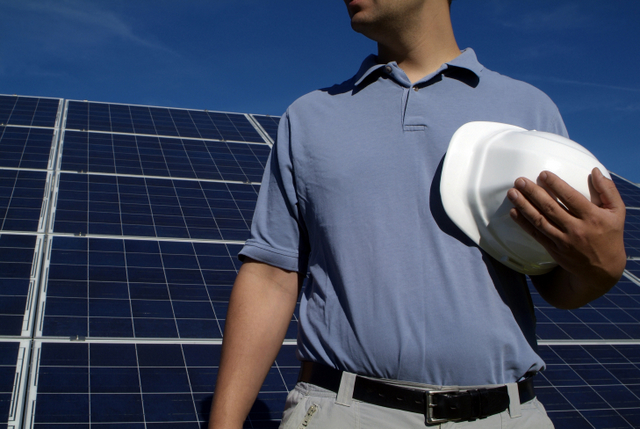 The Advanced Energy Economy Institute (AEE Institute) reports that Florida employed an estimated 140,282 advanced energy workers in 2015, nearly twice as many as in Agriculture, more than Real Estate, and equal to Schools, Colleges, and Training Institutions. These jobs spanned a broad range of technologies including energy efficiency, electricity generation like solar energy, as well as grid management and advanced transportation.

The report, prepared for the AEE Institute by BW Research Partnership, a leading labor market research firm, shows there are an estimated 25,528 employers engaged in advanced energy business in the state. Companies surveyed reported they expect to add more than 5,000 new jobs by the end of this year, to reach more than 145,000 total jobs, an expected 4 percent increase. 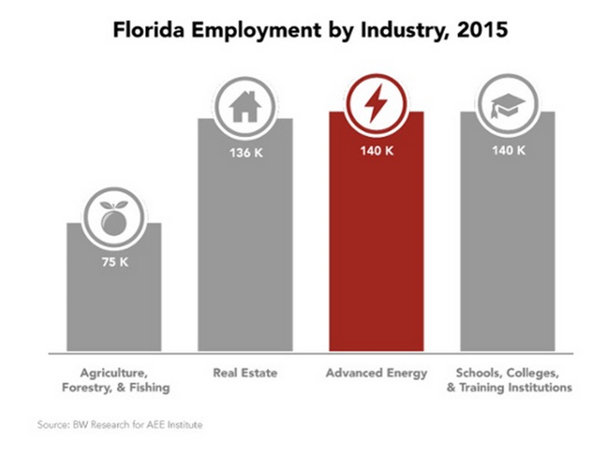 The new employment figures come as Florida voters consider a ballot initiative that would support expanded growth in solar energy. On Aug. 30, voters will be asked to approve constitutional Amendment #4 on the statewide primary ballot, which, if passed, would extend a property tax exemption for renewable energy devices, including solar, on commercial and residential properties. The ‘Vote Yes on 4’ solar campaign describes the issue and explains the ballot language to interested voters. The ballot initiative was put forth by State Senator Jeff Brandes (R-St. Petersburg) along with Representatives Ray Rodrigues (R-Fort Myers) and Lori Berman (D-Boynton Beach), and passed by the Florida legislature in March of this year.

“In Florida and around the country, advanced energy has become a significant market segment. That is paying off in jobs for Floridians,” said Graham Richard, CEO of Advanced Energy Economy (AEE), a national business association with many member companies operating in Florida. The AEE Institute is its affiliated nonprofit educational organization. “This report also shows that there is more room to grow. That’s good news for advanced energy companies and for the economy of Florida.” 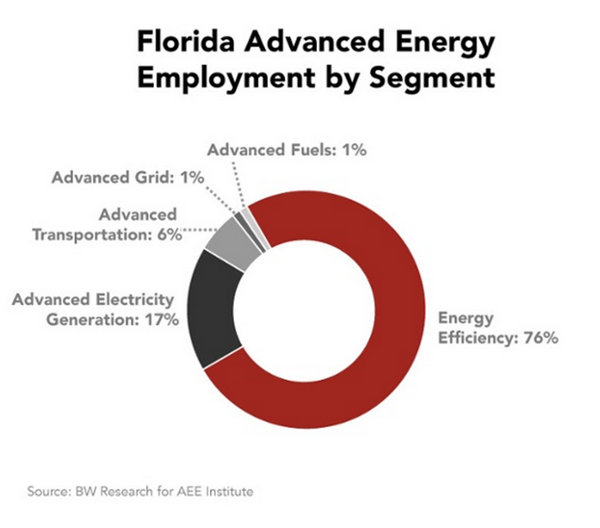 Detailed findings of Advanced Energy Jobs in Florida include:

• With over 106,000 workers, Energy Efficiency for buildings makes up three-quarters (76 percent) of Florida’s advanced energy workforce.

• Advanced Transportation employs almost 8,000 workers, and is quite large and varied compared to other states: fuel cell vehicles make up the largest share at 38 percent, with growth in Plug-in Electric Vehicle (PEV) and Plug-in Hybrid Electric Vehicle (PHEV) technologies expected to continue.

• The Advanced Grid segment employs 962 workers, with nearly half (47 percent) working on electric vehicle charging infrastructure, 39 percent in advanced storage, and 10 percent working on smart grid technologies.
• Although predominantly male (73 percent), one in four advanced energy workers in Florida is a racial or ethnic minority, with the share of last year’s hires significantly higher (39 percent).

• Nearly 8 percent of Florida’s advanced energy workers are veterans, and one in 10 is over the age of 55.

• Advanced energy firms in Florida report they plan to hire more than 5,000 workers this year, a nearly 4 percent growth rate, which would push advanced energy jobs to over 145,000 by the end of 2016.

• There are about 25,500 advanced energy companies doing business in Florida; with several profiled in the report, ranging from large global companies like JCI, a leader in building energy efficiency, to smaller local firms like Power Production Management Solar, a residential and commercial solar energy systems installer and authorized dealer for SunPower Corp.

• About half (49 percent) of firms report purchasing from local vendors and suppliers, indicating there is opportunity for growth in upstream advanced energy businesses in Florida.

With more than 20 million residents, Florida is the third most populous state in the country, and one of the fastest growing. It is also a big consumer of energy. Florida ranks second nationally in retail electricity sales, and has one of the highest rates of home electricity consumption in the United States, due largely to the need for year-round air conditioning. Advanced energy is meeting more of this growing demand for electricity and vehicle fuel.