Missouri’s largest solar farm has been awarded the Project of the Year by the Conduit Division of the Plastics Pipe Institute Inc. (PPI) for its use of cable in conduit (CIC) – wire preloaded at the factory in conduit made from high-density polyethylene (HDPE) – to link up the 19,000 solar panels. The presentation was made to the CIC manufacturer and PPI member company Southwire Company, LLC (Carrollton, Ga.) during the association’s annual membership meeting held in May 2015 in Coeur d’Alene, Idaho. 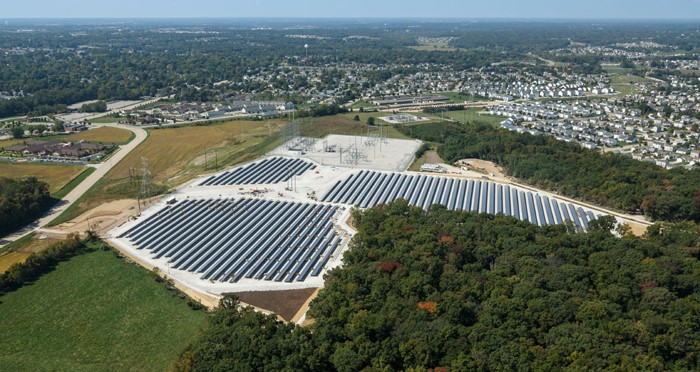 The O’Fallon Renewable Energy Center, encompassing approximately 20 acres in O’Fallon outside of St. Louis. With 19,000 solar panels, it is one of Missouri’s largest photovoltaic solar fields and is now generating 5.7 MW of electricity enough to power 650 average sized homes.

The O’Fallon Renewable Energy Center is Ameren Corporation’s first solar field for the region. Encompassing approximately 20 acres in O’Fallon, a city of just under 100,00 people outside of St. Louis, it is now generating 5.7MW of electricity, which is enough to power 650 average sized homes. Construction started during the summer of 2014 and was completed at the end of November 2014. It went online in December.

“The key to this project was the flexibility of the CIC,” stated Tony Radoszewski, president of the PPI, upon presentation of the award. “This solar farm ranges over a lot of land – more than 15 football fields. The 2.5 inch diameter CIC came on large reels and easily conformed to the contours of the terrain and the trenches. This inherent attribute of the HDPE conduit enabled the thousands of solar panels to be linked together and the entire farm connected to the grid in the shortest time possible with a minimal crew and with the fewest pieces of equipment.” 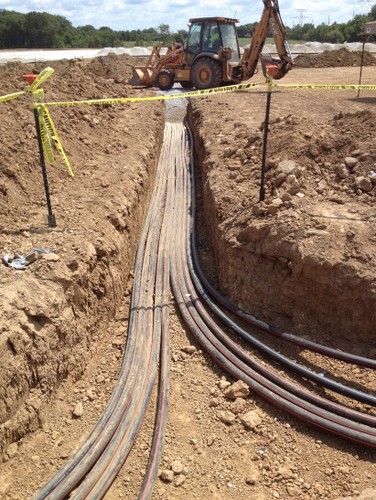 Instead of using traditional pipe and pulling wire, the O’Fallon solar farm used 19,000 feet of Cable in Conduit, which saved time and money.

Approval was received from the utility to upgrade the design to HDPE CIC from PVC conduit that would have required the wire being pulled onsite. The change was permitted because the HDPE conduit is dimensionally the same as PVC and is UL listed. The improved flexibility, lack of joints, better coefficient of friction, availability of marking stripes, and protection of the cables in the HDPE conduit were all factors in making the change.

Utilizing CIC took more up-front planning than using traditional conduit and wire because CIC is ordered specifically for each project. This preplanning, however, saves installation time onsite. The CIC was used for all of the feeds from the 69 solar panel combiner boxes to the inverters, which changes the DC power from the solar panels into common AC power. 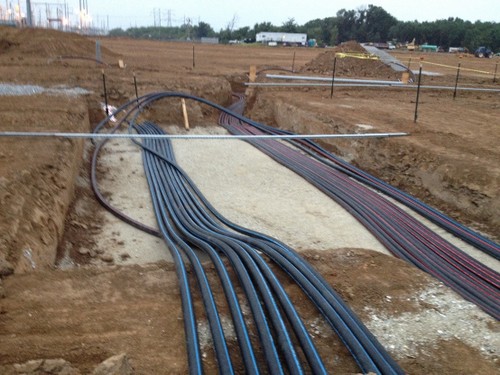 Cable in Conduit runs from the solar panels to the inverters. The conduit was color coded for easy, quick identification of the size of the wire inside.

In total, some 19,000 feet of CIC was installed. Two different sizes of wire were utilized inside the CIC. To differentiate the two, Southwire added a colored stripe on the outside. The CIC that had 2-250 MCM aluminum PV wire had a red stripe, while the CIC with 2-350 MCM aluminum PV wire had a blue stripe. This custom color-coding by Southwire helped to easily identify the conduit at a quick glance.

According to PPI, CIC can provide cost savings when compared to other, traditional methods of installing underground conductor into another type of conduit. With the cable already installed into the duct, and availability in long lengths, there is no need for pulling equipment, elbows, lubricants, etc. CIC allows a crew to install thousands of continuous feet of wire quickly and correctly because they no longer need to be involved with rigid conduit pipe with joints every 20 feet that involve gluing belled ends that could be improperly installed. CIC also allows a crew to move in and out of a job more quickly which, in turn, saves the customer money versus using traditional methods of conduit installations. 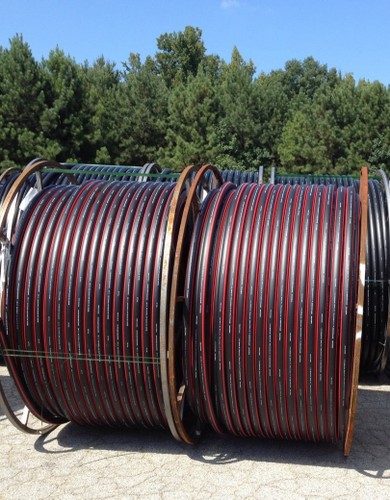 Compared to the cost estimate for using traditional conduit and wire for the O’Fallon job, CIC saved approximately five minutes a foot on the installation in the trench. This ended up saving the contractor almost $100,000 in labor costs.

“CIC and HDPE conduit are protective pathways for telecommunications and power cables used throughout the infrastructure,” explained Sarah Patterson, technical director for PPI. “The inherent properties of HDPE such as chemical resistance and stress crack resistance are well-suited for infrastructure systems since these require long service life. Because of HDPE coilable conduit’s long lengths, flexibility, and tensile strength, it is ideally suited for HDD and plowing installation methodologies that have minimal impact on traffic and the surrounding infrastructure.

“Having a flexible continuous length conduit sped installation and bypassed the need for a complex arrangement of elbows, sweeps, connectors and supplemental labor and equipment. CIC made the job far more economical and is a truly smart solution for the long-term, speeding provision of this advanced solar energy system while using fewer resources to bring power online faster – a very progressive infrastructure answer for innovative new energy sources such as the O’Fallon solar farm.”