The APS plant that gave birth to commercial solar power in Arizona quietly comes of age this month in Flagstaff. Instead of celebrating with a glamorous “Sunny Sweet 16” party, this teenager will simply keep turning sunlight into clean, renewable energy for APS customers. 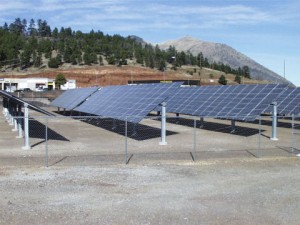 “The Flagstaff facility is an important milestone in making Arizona the solar capital of America,” said Barbara Lockwood, General Manager of APS Energy Innovation. “Since 1954, APS has led the advancement of solar energy in Arizona. No one is more committed to creating a sustainable future for our state than the more than 6,700 employees who make up APS. The proof is in the numbers.”

APS solar by the numbers:

— $1 billion – Amount APS is spending to build and operate solar plants across the state.

— 300-plus – Number of schools participating in APS programs to install solar panels.