As part of President Obama’s all-of-the-above strategy to expand domestic energy production, Secretary of the Interior Ken Salazar announced in December the release of the Final Environmental Impact Statement (EIS) for the McCoy Solar Energy Project, a proposed 750-MW facility in Riverside County that would be one of the largest solar energy projects on public lands in the California desert. 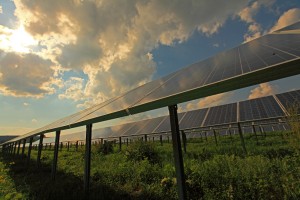 If approved, the project will join 34 renewable energy projects that the Administration has green-lighted for construction on public lands since 2009. Together, the projects have the potential to produce approximately 10,400 megawatts of energy – or enough to power approximately 3.4 million homes – and exceed President Obama’s goal of authorizing 10,000 megawatts of utility-scale renewably energy on public lands by 2013. Prior to 2009, there had been zero solar energy projects authorized on public lands.

“The McCoy project reflects this Administration’s groundbreaking efforts to stand up a renewable energy economy on public land,” Salazar said. “As we move forward to strengthen our nation’s energy portfolio, what’s happening with renewable energy is nothing short of a revolution. From authorizing more than 10,000 megawatts of energy on public lands, to establishing a roadmap for responsible solar development in the West, to flipping the switch on the first solar energy project to deliver power to the grid, 2012 has been a year full of results.”

As proposed, the McCoy solar project would use photovoltaic technology to generate up to 750 megawatts of energy, or enough electricity to power 225,000 homes. According to McCoy Solar, LLC, the project developer, the project would employ 600 workers during peak construction. The proposed facility would be developed on approximately 4,400-acres of mostly public lands managed by the Bureau of Land Management (BLM) near Blythe, Calif. The project would also include a 14.5-mile generation tie-in line and 2-acre switch yard connecting with Southern California Edison’s Colorado River Substation.

“In line with the administration’s broad commitment to expanding production of all sources of American made energy, we’ve taken a landscape-level look at public lands in the west to see where it makes sense to develop solar energy,” said Deputy Secretary of the Interior David J. Hayes. “And we’re seeing results, with energy from sources like wind and solar doubling since President Obama took office.”

In October, Salazar finalized a program this year for ‘solar energy zones’ that will help spur development of renewable energy on BLM-managed public lands in six western states. The Programmatic Environmental Impact Statement for solar energy development provides a blueprint for utility-scale solar energy permitting in Arizona, California, Colorado, Nevada, New Mexico and Utah by establishing solar energy zones with access to existing or planned transmission, incentives for development within those zones, and a process to consider additional zones and solar projects. The initial17 solar energy zones encompass about 285,000 acres of public lands.

In June, Salazar approved a 350-megawatt solar energy project on tribal trust land of the Moapa Band of Paiute Indians in Clark County, Nevada. This is the first-ever, utility-scale solar project approved for development on tribal lands — and one of the many steps the administration has taken to help strengthen tribal communities. The Moapa Band negotiated a $1.6 billion power purchase agreement with the Los Angeles City Council to provide power from its solar plant for 25 years. The facility is expected to go on line in 2016.

In May, Salazar ‘flipped the switch’ on the Enbridge Silver State North solar project, the first utility-scale solar energy facility on U.S. public lands to deliver power to American consumers.

As part of the all-of-the-above energy strategy, the BLM expects to finalize the development of a draft proposal for competitive leasing of solar and wind energy on public lands in 2013 and to review additional proposed priority renewable energy projects.

“The BLM has been working closely and collaboratively with local communities, states, tribes, industry, conservationists, and other interested stakeholders to develop a sound, long-term plan for generating wind, solar and geothermal energy on our nation’s public lands,” Acting Deputy Director Neil Kornze said. “Under our ‘Smart-from-the-Start’ review, we continue to make progress in paving the way for responsibly developing utility-scale renewable energy projects in the right way and in the right places.”

In the Final EIS for the McCoy proposal, the preferred alternative requires the developer to avoid Desert Tortoise habitat and washes by shifting the proposed project boundary and to mitigate impacts to disturbed Desert Tortoise habitat by protecting habitat outside the project site at a 1:1 ratio. The final EIS also includes a proposed amendment to the California Desert Conservation Area Plan.