5D Watts, a custom composite manufacturing company, sent word that it has initiated formal certification testing of Hybrid Solar Concentration PV and Heat Energy System. After completion of a production prototype, and in-house testing for almost two years, the company says it is ready to complete certification testing with CERT. 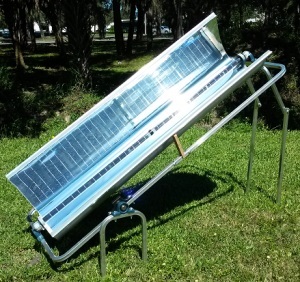 “Having reached the patent pending production-ready stage, now pushes 5D Watts into the final certification process, before beginning early adopters’ installations,” says CEO Andrew Rekret. “We have customers ready in Europe, the U.S. and Canada. We also have a set of installations in the Caribbean and Costa Rica.”

Based on the early market response, 5D Watts plans to expand its market presence in a coordinated and strategic way, already moving aggressively into Europe.

• Set up Testing and Implementations Program for a few diversified installation sites in key markets.
• Locate more than 20 key market installations in German-speaking countries, as the first step in our planning to be able to optimize and penetrate the rest of Europe.

“We want to be able to offer the consumer a beautiful, durable Solar Energy System, that produces almost four times the output of flat PV, at the same price or less, than any existing system,” the company noted.