First ‘certified passive house’ up and running in California (with DEGERtrackers)

In 2007, wildfires destroyed Amy McQuillan and Pete Beauregard’s home that sat atop the San Pasqual Valley, California. From the ashes emerged an opportunity to build a modern home with sustainability integrated into every aspect of the design.

Casa Aguila is located in the mountains of San Diego and impresses primarily with its stylish design and modern technology. But the state of the art residential home is also the first certified passive house in California. The goal was and still is: that modern living and energy efficiency should be optimally coordinated together, and ensure independence from the public power utility network. 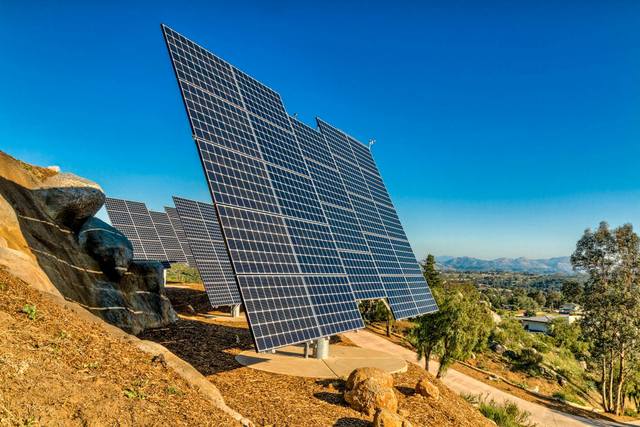 The biggest challenge is the off-grid power supply of a large home with complex energy needs. Taking a small, modest home off-grid is fairly easy, but a daunting task for a luxury home as the technology that enables the goal is only just now becoming available.

Three DEGERtrackers D60H with an installed capacity of 22 kWp supply the building with the required energy every day. The patented MLD sensor continually measures the intensity of radiation and moves the solar module installation into the most advantageous position. With this technology DEGERtrackers generates approximately 45% higher yield compared to fixed tilt systems and supplies the house with around 44,000 kWh of solar energy annually. In addition, a 3.2 kW wind turbine supports the energy requirements of the property. By combining solar and wind energy, the house is supplied with 12 hours of self-generated green electricity every day. A 40 kW battery storage system provides the capacity to operate the home when there is insufficient generation.

RELATED: The value of residential solar trackers for installers and customers

In all installed appliances, attention was paid to the lowest possible consumption and the latest technological developments, but for example the pool system requires a large proportion of the electricity produced. Due to the low capacity of the existing battery, additional electrical needs to be purchased from the public grid, but this is proportionally very low. By installing a 100 kWh storage system, the required electricity from the public network is to be reduced to a minimum. In best case, the power supply could be completely switched to off-grid. 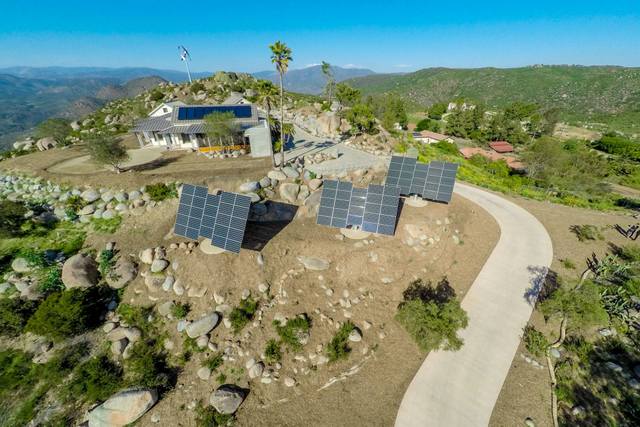 Energy management was not the only technical challenge to be overcome however, but also the water supply challenge was resolved using an ingenious system. Casa Aguila was the first house in San Diego that covers the water demand 100% with rain water and used all wastewater to irrigate fruit trees and other plants on the property. Nine 10,000 gallon tanks store all the captured water. The rainwater is treated and runs through several utilization cycles. Greywater from the shower, pool and washing machine is treated and reused for garden irrigation and toilets. In the third stage, the used blackwater is collected in a separate system and treated to be used for irrigation of fruit trees and crops. Because Amy McQuillan and Pete Beauregard have already lost their first house during the wildfire, for emergency three water tanks for fire suppression are available.

The house is also a SmartHouse where electricity, heating, air conditioning and all appliances are linked with a monitoring and control system. “It tells you what’s happening in real time so that you can see where you are using energy, “Amy McQuillan says. “Energy monitoring has a commercial basis that’s been used in the past, but residential is fairly new. Doing it the way we’re doing it is almost unheard of.”

From a panel in the kitchen, Amy and Pete can watch and control how efficiently the home works and also receive a weekly diagnostic email.

Amy McQuillan and Pete Beauregard committed themselves to environmental protection: “We want to be prepared for whatever might happen, including the effects of climate change, but also to make a contribution by having a house that’s using less water and energy.”

They have been inspired by the solutions from Alliance Green Builders and fulfilled their dream of a passive house that already is almost independent of the public power grid. Further technical developments are planned to be incorporated into the project, further demonstrating this home as a model for future sustainability.