Ohio developer Third Sun Solar has seen many changes in the industry in the last 15 years and likes where things are heading.

In 1804, Ohio University became the first university established in Ohio. The ninth oldest public university in the United States, OU set up camp in Athens, Ohio, and the 20,000 students who call it home each year swell the population of the city only to leave once summer arrives. 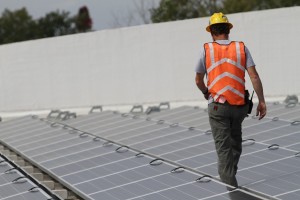 But not Geoff and Michelle Greenfield. After completing their master’s degrees at OU, the couple decided to make Athens their home. They installed some solar systems on their off-the-grid home in 1997, and the community took notice. People started inquiring about how they did it and if they would help on new projects. What started out as a hobby job grew organically into a small solar business for the Greenfields.

Third Sun Solar was officially founded in 2000, and one of its first major projects was for the university that fueled the Greenfields’ love for Athens in the first place. Ohio University’s Innovation Center wanted solar installed on its rooftop. After the project was completed, OU invited Third Sun to move out of the Greenfields’ home and into its small business incubator, a place where tech-based businesses could get office space and support services to grow. Third Sun spent nine years at the university before “graduating” in November 2012 to a building all of its own.

“We saw the most rapid growth from 2008 to 2011. The company grew very quickly,” says Gerald Kelly, communications director for Third Sun. “We’re now trying to strengthen our position among solar installers in our region, looking at expanding into some market segments that we have served before but not focused on so much.”

Today the company employs around 25 people and does a mixture of residential and large commercial-sized projects. Its natural home base is Ohio, but Third Sun has done projects in Pennsylvania, Michigan, Kentucky, New York and Florida. Some of its customers include Kent State University, the Kentucky National Guard, Cincinnati Parks and, most recently, specialty insurance provider Assurant. Third Sun completed construction on Assurant’s 1.76-MW project in Springfield, Ohio, earlier this year.

“Assurant [was] considering entering the renewable energy insurance market,” says Jeanne Schwartz, vice president of new venture commercialization for Assurant. “To learn more about the solar energy industry, we decided to install a test project on one of our office locations.”

Assurant sent out a request for information to solar developers, asking them to recommend the best Assurant sites for installation. Every vendor came back with the recommendation to develop a project at Assurant’s specialty property call center campus in Springfield, just outside of Dayton. 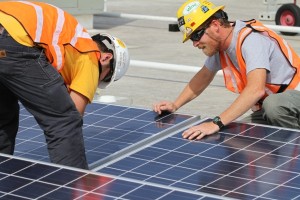 “The installation process allowed us to learn about the industry,” Schwartz says. “It became clear to us how important solar insurance could be in helping lending institutions get comfortable about the long-term viability of a project. We learned how difficult it can be to get a solar project deal to completion, how important solar insurance can be to securing a project’s cash flows and why that can be critical to investors and lending institutions.”

The 1.76-MW project consists of 6,200 panels on the site’s rooftop and 15 new solar carports in the parking area. Assurant worked through a PPA offered by Tangent Energy Solutions who, in turn, hired Third Sun for the project.

“For a complex project such as this where we were closing areas of our parking lot down on a weekly basis for the construction of the carports, Third Sun was very cooperative with working around our needs and ensuring that the site remained in a safe condition at all times for our employees,” Schwartz says. “Safety is a top priority for Assurant, and Third Sun has supported and embraced this culture during the project.”

ENCOURAGING PROJECTS
Third Sun has grown from doing very small, mostly off-grid residential systems to a wide range of commercial jobs in different market segments — nonprofits, hospitals, corporations, parks. Kelly says business has been steady in the commercial sector, but finding residential projects is a struggle in the Midwest, where energy prices are already low.

“The low cost of energy in Ohio works against solar,” he says. “Most investor-owned utilities in Ohio generate most of their power from burning coal. When you have low utility rates, when brown power is cheap, solar and renewables are obviously a much tougher sell. The payback is longer, the return on investments is further out, it’s tougher to cost-justify projects.”

The large majority of residential projects Third Sun takes on has been for customers who are very dedicated to being green and understand the initial poor financial return. But Kelly is hopeful that this trend will change for the better.
“Looking into the future, natural gas is going to be a huge factor in this part of the country. That will put pressure on utility rates, and we think that will help make the financial case for solar more appealing,” he says. “As we begin to see the combination of upward pressure on utility rates and downward pressure on system components prices, as we’ve seen with solar panels, then the financial picture overall will make it an easier case [for residential solar installations].”

In the meantime, Third Sun is actively looking for opportunities to bid on jobs. 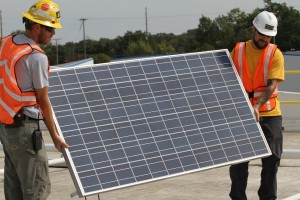 “We try to emphasize wherever we can with potential big jobs and customers [that] with something like solar, when you’re putting an electrical power plant on your roof or parking lot, the low price isn’t necessarily the best value,” Kelly says. “Sometimes we do have the low price, but we want to build good, highly productive systems that exceed our forecast for electrical production. Part of that battle is getting customers to understand that the low price isn’t always the best value.”

PROGRESS IS NOW
With nearly 15 years of experience, those at Third Sun have seen different products come and go in the industry but they’re pleased with how things are progressing.

“We’re finding improvement in quality and cost,” Kelly says. “We’ve been kind of conservative in terms of jumping on new technologies. We don’t want to be on the bleeding edge. The market for panels has become much more competitive and so the price and cost for panels have gone down dramatically. We’ve seen improvements across the board in some of the BOS components, like inverters. We see now many more opportunities as a company.”

The future looks promising as young minds continue to evolve into a greener way of thinking.

“Think about this millennial generation,” Kelly says. “Your next generation of employees and your next generation of customers are people who have come up from kindergarten on, taught that the earth must be saved and it’s your job to do it, and the answer to every question is technology. I think those things are baked into the emerging generation much more so than 10 years before. I think the world in that way is ready for solar.”