Tony’s Fine Foods in West Sacramento, Calif., needs to keep its products cold. The privately-owned distributor of deli, bakery and perishable food items has a warehouse the size of three football fields. That’s a lot of food to keep track of, and that’s a lot of energy needed to keep everything the right temperature.

So installing a solar power system seemed like a great way to cut energy costs, but it wouldn’t exactly be practical to drill holes into the rooftop to install panels, puncturing insulation and refrigeration aspects. 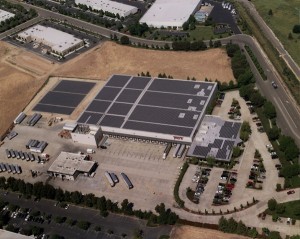 A non-penetrating, ballasted system was determined to be the best option, and SunLink Corp. — a provider of commercial PV mounting solutions in San Rafael, Calif. — helped make this happen for Tony’s.

“We’ve done over 1,000 large projects,” says SunLink CEO Christopher Tilley. “Last year, if you looked at the market for big, flat commercial rooftop systems, about 30 percent of the ones that went in were our systems. We’ve done them in hurricane zones in Florida, done them in Ottawa with snow loads beyond belief, done them in California where they have serious earthquake issues. We’ve done an enormous amount of R&D, and our real advantage and reason to be is engineering and solving these problems.”

The biggest concern in installing rooftop solar arrays is safety. That means ensuring it doesn’t fly off the roof in bad wind and also making sure it doesn’t influence the structural integrity of the roof itself. Both of these factors sometimes compete against one another.

“When we go on a building that is a great opportunity for solar, a lot of times — depending on the wind zone and other things about the building — you find out you’re going to have to put enough weight on it to keep [the system] down and the building can’t support all that weight,” Tilley says. “So then you look into a penetrating system, but nobody wants to put holes in their roof.”

SunLink works to provide the most appropriate mounting system for each project. The company has non-penetrating, penetrating and hybrid systems available.

For Tony’s Fine Foods, SunLink worked with contractor Solar Development to install 5,768 panels on a 5-degree tilt angle across the 140,000-sq-ft warehouse roof. The 1.2-MW system is entirely ballasted because penetration could damage the refrigerated warehouse, but simply ballasted systems aren’t appropriate on all large rooftops.

“You see all this great space, but a lot of those [roofs] are lightly built. They’re not built to take almost any additional load. They were trying to make them inexpensive and real efficient,” Tilley says. “The roofs can’t take the weight that you need to keep it down alone.”

SunLink worked on a hybrid system for the Royal Horse Palace in Toronto in 2006. The historic site in Canada has intricate style and copper detailing on its exterior. Those involved wanted to preserve the integrity of the rooftop but also promote the advantages of PV projects in the area, so a 100-kW system was installed with limited roof penetrations. 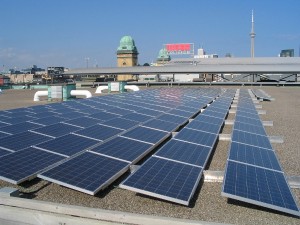 ROYAL HORSE PALACE: The historic site in Toronto received a hybrid mounting system to limit penetrations into the roof.

“Most places that we’re putting these arrays on weren’t originally designed to put solar on. You have to make sure that they can support it,” Tilley says.

The SunLink roof-mounting system allows for prepanelization, which can take more than 50 percent of the labor off the roof, limiting the weight on the rooftop. The company’s Tilt-Access feature allows for easy roof maintenance and unimpeded roof drainage. SunLink’s goal is to bring solar power to places not originally designed to support it — places like reservoir caps, landfills and historic buildings.

“Those are wonderful projects because they’re wonderful signs to the community. They’re symbolic in a lot of ways,” Tilley says. “Typically, it is driven by local people and the community wanting to show their commitment to sustainable practices and clean energy.”

And if those at SunLink can help communities get the energy practices they want and need, they won’t poke any holes in it if they don’t have to.

To see a step-by-step guide on how to install non-penetrating roof mounts to flat rooftops, read our story here.