Lessons From The Field

The demand for solar trackers is expected to grow exponentially by 2020, possibly by as much as $2.14 billion in the United States, according to a new report by Grand View Research. And, leading the way, will continue to be single-axis solar trackers.

Leading manufacturers of single-axis trackers laud their technology for energy production efficiency, reliability and cost advantages. Marketing claims aside, there are a few basic factors that developers and engineering, procurement and construction (EPC) contractors should consider when comparing tracker systems.

Modules are mounted using methods similar to fixed-rack mounting, but a tracker must have a mount that can be rotated. In nearly all designs, modules are installed on a round or square tube (torque tube) that is mounted to bearings. 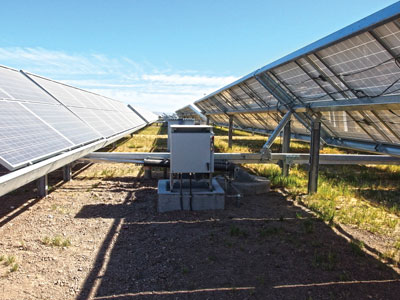 One of the most common tracker designs makes use of a large diameter polymer journal bearing that encircles a torque tube and rests in a large outer race. Though simple, the journal bearing design is a top-heavy inverted pendulum design, which can be a disadvantage. The inverted pendulum makes the tracker prone to oscillation and puts individual tracker rows at risk of crashing when they are freed from the drive system. In addition, maintenance can be more difficult or even dangerous due to the large mass and its propensity to fall.

Another common design makes use of a small bearing located above the torque tube. In this configuration, the center of gravity is located at approximately the same elevation as the bearing. The tracker row is relatively stable under gravity, less prone to oscillation and easier to repair. This is known as a “row-balanced” design.

A third design approach makes use of a small spherical bearing that is located above and to the side of the torque tube. This allows for two possible configurations to manage gravity kinematics either as a row-balanced design or as a biased row that offsets the mass to the side of the bearing. By using mirrored half-arrays, the biased row configuration can be used to create an array balanced design that has low operating forces and is safe and simple to service.

Actuator configurations can be divided into two basic groups: distributed actuation and central actuation. Though most of the cost is in the structural material, the support structures and bearings are typically durable. Pay attention to the differences in actuators and controls because these affect operating reliability and long-term maintenance cost.
As with inverters, there is discussion and debate about the better method. Each has its advantages and disadvantages. Distributed actuation makes use of a slew drive or linear actuator at each tracker row — one motor for each 12 to 30 KW. It is slightly more structurally efficient and is much more adaptable to a non-uniform site layout and variable terrain. However, this approach has a higher initial cost and less reliability because each row becomes a stand-alone tracker. That said, power and control cables must be routed throughout the arrays and control sensors are required at each row. With 30 to 50 times more low-cost motors and sensors, predicted reliability is much lower and expected maintenance costs are considerably higher than what can be achieved with centrally actuated arrays. Trackers that are self-powered by a small PV panel and battery system have the added complexity and maintenance requirement of an off-grid solar system at each row.

Alternatively, central or ganged actuated systems connect rows via a simple push-pull linkage or, if utilizing a slew drive, a linked prop shaft. Arrays can range from 100 KW to larger than 1 MW for a single motor and sensor. With far fewer motors, sensors and controls, central actuated systems achieve economies of scale, which reduces both equipment and installation costs. Because fewer motors and sensors are required, it is possible to employ rugged, industrial-grade components that can endure demanding environmental conditions and yield much higher predicted (and actual) reliability. On the flip side, ganged systems typically require a rectangular layout making them difficult to employ in sites with uneven boundaries. Linked push-pull systems are simple and easy to maintain, but aggregate forces at the drive point, requiring additional structure and a heavy drive foundation.

Slew drives and high force screw jacks are relatively costly compared to small linear actuators and fluid power drives because they must be made from precision-machined, heat-treated gears and screws.

Heavy-duty screw jacks are used in several different push-pull ganged systems and are suitable for the low duty cycles of solar tracking. Although they are catalog items, they are not widely available and are costly to repair or replace.

Small, electric linear actuators are used on distributed actuation tracker systems. Because they are low cost, they are often replaced as they fail. This “break-and-replace” model seems appealing due to low cost parts, but in practice, this results in both greater maintenance costs and greater lost production due to down time.

Other technologies make use of a slew drive at each row either by mating the slew drive to a small motor and an offset arm to deliver a distributed actuation balanced row tracker. Or, by ganging a slew drive to a single-drive motor/reduction gear box via a prop shaft to allow for offsetting of rows and better matching of array to site boundaries. Slew drives have the advantage of structural efficiency because they do not back feed forces into the prop shaft. However, they also carry a high initial cost because one drive is required at each row (19 KW typical) and a long-term maintenance cost risk (each of the 35 and 55 required drives per MWdc is estimated to cost between $1,000 and $2,000). The drives are also less widely used than screw jacks and not easy to source.

Virtually all trackers make use of an electronic control system that measures the position of the tracker (directly or via a proxy), starts and stops the motors that drive the actuation system and controls the direction and distance of motion. For system reliability, the control system is the item of greatest concern.

PLC-based controller designs make use of off-the-shelf industrial automation components. As such, they tend to be more robust and do not require specialized technicians to maintain. These boards can also include optional hardware for Internet connection and SCADA (supervisory control and data acquisition) integration. The primary disadvantage of programmable logic controllers (PLC) is their relatively high initial cost. In the case of central actuation designs, where durability and maintainability are essential, the high initial cost is worth the investment because the board components are supported by long established companies that continue to provide backward compatible improved components.

Control sensors and software also make use of different approaches. On the one hand, light-sensing controls are intended to point the tracker as directly as possible at the sun. In practice, this control design has proven to be somewhat high maintenance.

Alternatively, time and location algorithms have proven to be quite reliable. These control systems typically make use of a sun model that can compute the position of the sun in the sky at any time for the foreseeable future.
Another time and location approach employed by several linear actuator and slew drive systems is the use of an encoder to measure how far the system has moved since its last set point to compute a proxy for actual tilt-angle based on the magnitude of the motion. Though this approach does not actually measure the position of the solar modules, these encoder-based systems have proven successful.

It is important to carefully weigh the costs and benefits of each tracker design alternative in the context of what is ideal for a given solar project. The analysis should include not only equipment cost and installation labor advantages, but also risk mitigation associated with owning and operating the system over its 25-year lifetime.