Powering up the Economy

In less than 90 days, Strata Solar managed to develop and build a 5-MW solar farm with inexperienced hands and still come in on time and on budget. The Chapel Hill, N.C.-based solar contractor installed 22,000 panels on 30 acres in Cleveland County, about 30 miles west of Charlotte, with the help of young, out-of-work adults.

Strata worked with the Raleigh Business & Technology Center (RBTC), which helps find jobs for young adults in minority areas impacted by the economic crisis. RBTC’s mission is “to provide entrepreneurs, start-ups and owners of small businesses the tools and the blueprint for commercial and financial success.”

“We had [RBTC] provide fine, young people for us who needed a job. We trained them in renewable energy using local workforce development boards and community colleges that do training of installation of panels,” Wilhelm says. “They got a really good education on it, and [when] the project was finished, we moved them on to the next project — not all of them, but a big chunk of them.” 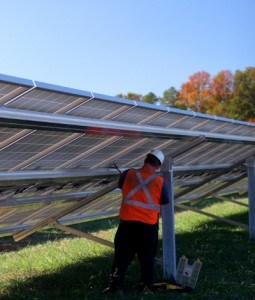 Strata plans to build two more 5-MW solar farms in the same area as Kings Mountain so most of the young people involved can continue working and hopefully make the transition to permanent employment.

“It is a nice touch because I don’t think this happens a lot. Most of the companies just try to get it built and hire construction workers. We try to do not only something that is environmentally sound but also — in these tough economic times — provides jobs for people who really needed a job,” Wilhelm says.

The Kings Mountain project is the second largest in the state and connected to the grid in December 2011. Duke Energy Carolinas signed a 20-year contract to purchase the produced energy. Strata has worked with Duke Energy on a number of projects, choosing sites that are preferable for easy interconnection to the grid.

“Cleveland County is an area that economically needed support,” Wilhelm says of the Kings Mountain location. “We look for sites in areas where we have no interconnection issues. And from a social development viewpoint, we thought [Kings Mountain] fit our overall agenda.”

To continue stimulating local economies, Strata has ten more projects of similar size on 2012’s agenda (including the two near the Kings Mountain area). 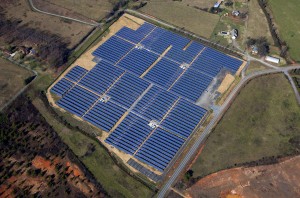 Wilhelm says he feels the solar industry’s good is often overshadowed by one bad thing.

“You always hear wherever you go, people talk about Solyndra. We allowed Solyndra to hijack the news for solar companies, and there are many examples where companies like ours, who haven’t gotten any subsidies or anything, [but still] create jobs on a pretty large scale,” he says. Strata plans to hire an additional 150 RBTC-suggested employees within the next six months.

“For us, Kings Mountain Solar Farm was proof of concept that we could build in record time a 5-MW solar farm while training a very young workforce in renewable energy, getting them ready for a career in that field and still building it cost-effectively and on budget and on time,” Wilhelm says.