A special racking system pushes a California city closer to its renewable goals.

Listed by BusinessWeek this past fall as the fifth best city in America to live, Irvine, Calif., lives up to the hype. It has good schools, great people and ambitious goals. In 2008, the Irvine City Council voted unanimously to adopt a 20-year energy plan. Citizens were encouraged to increase energy efficiency, increase use of renewable energy and reduce greenhouse gas emissions through the slogan “100% Participation, 100% Irvine.” The council also set a goal for 40 percent of the city’s energy to come from renewable sources by 2015 and 60 percent by 2020. The State of California, in comparison, aims to have 33 percent of its energy use be supplied by renewable sources by 2020.

Nikken Inc., a provider of wellness home products like sleep systems and nutrition products, is headquartered in Irvine and wanted to participate in the city’s plans. Using three of its rooftops, the company installed a 680-kW solar system in September 2011 that should generate 80 percent of its electrical requirements. 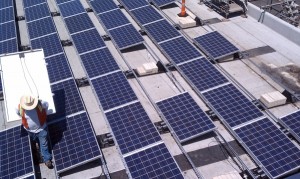 The system was installed by PermaCity Solar, and Sollega Inc. provided its InstaRacks racking system for the project. A total of 2,224 InstaRacks with a 10-degree tilt angle were installed to mount 2,886 solar modules.

The InstaRack system allowed for a flexible, roof-customized array, totaling more than 73,400 sq ft. Because of the large number of skylights on the roofs, it was uncertain if enough PV modules would fit. The flexibility of the InstaRack system made it possible to work around these obstacles and to maximize the harvestable rooftop space.

“Sollega’s InstaRack is very intuitive to install and does not leave any promises unfulfilled ­— it’s a breath of fresh air,” says H.D. Boesch, CTO of PermaCity Solar. 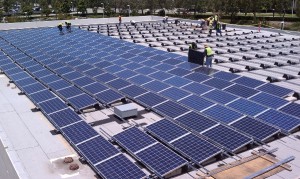 The PermaCity Solar crew was impressed by the speed and ease of installing the Sollega InstaRack system. They spent less time on the roof and had fewer parts to manage than with other ballasted racking systems previously used.
The Sollega and PermaCity Solar engineering teams were able to keep the roof loading to a minimum by choosing an optimal balance between ballast pavers and roof anchors. The average system weight is 6.5 pounds per square foot. Low weight was a crucial requirement in making the project a success.

With the completion of the system atop Nikken’s rooftop, Irvine is one step closer to using more renewable energy. As it inches closer, maybe BusinessWeek will bump it up the scale.