Often finding that marquee project is the most challenging part of breaking into a new market. Several innovative new-comers joined on one project to dive into the solar industry together.

With a strong presence in several infrastructure-related construction markets, including heavy civil, transportation, construction materials and power, Watsonville, Calif.’s Granite Construction made significant strides to enter into the renewable energy industry in 2009.

Seeing that its nearly 150 aggregate facilities and concrete, gravel and asphalt plants were huge consumers of power, Geoff Boraston, director of environmental affairs for Granite, saw an opportunity to kill two birds with one stone: save on energy costs and leverage its capabilities by gaining solar construction experience. 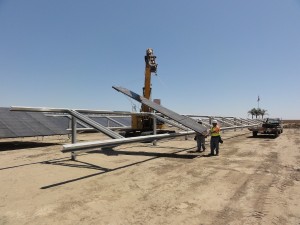 “Our Coalinga operation was the ideal spot for self-generating power using solar,” he says. “At the time, we were moving into the market of constructing solar systems, so it made sense for us to develop and build the project ourselves.”

With the planning process well underway, Granite hired Sean Kilgrow — who has just helped Quanta Services improve its own renewable division — as the renewable power business development manager. Through his various contacts throughout the industry, Kilgrow was put in touch with Solar Frontier, which was trying to increase its presence in the United States. Solar Frontier uses copper, indium and selenium (CIS) technology, which claims to provide a higher performance ratio than crystalline silicon and other thin-film modules, and higher efficiency than other thin-film modules. Soon after striking a deal with the panel manufacturer, eIQ Energy (a young company), Siemens and Unirac came on board, too.

Coalinga turned out to be a great site — it generally sees clear skies year-round and it’s located within PG&E territory. Still, the development of the site offered a few challenges.

“We were anticipating a rough environment because excavation sites generate dust,” Kilgrow says. “The fact that the Solar Frontier panel is able to capture so much diffused light and translate that into electrons has been marvelous. That hasn’t been an issue at all.”

When combined with eIQ Energy’s innovative parallel solar technology (which improves performance and the ROI for PV systems), Solar Frontier’s panels are able to produce nearly half of the site’s yearly power needs, even through the dust and dirt. 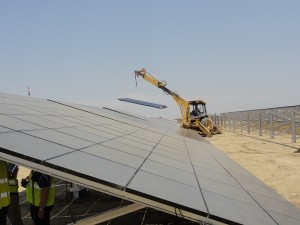 “It’s sort of through luck, or the solar gods were smiling on us, that we were able to bring all this together in one project. And the solar plant has proven to perform well in that environment,” Kilgrow says.

The 1.2-MW project was completed in October 2011 and officially connected to the grid in December. The project not only furthered Granite’s sustainability efforts, but it advanced project development initiatives.

“Our executive committee committed dollars to fulfill our sustainability plan but also to provide us with the tools we needed to go to the market and get more business,” Kilgrow says. “It gave our managers experience managing the job. It gave us real time cost data so we could go out and bid work. It also gave us relationships on the technical side.”

Kilgrow says the most important part of being involved with the solar industry is building relationships.

“We all came together as a team and were able to get to the point where I felt comfortable — they made me feel comfortable — that it was going to work,” he says. “Everything [Solar Frontier] has said they’ll do, they’ve done. Everybody on the job was fantastic.”