Head of the Class

Schools hold our youngsters’ futures in their hands. Standard Solar partners with educational institutions and takes that responsibility one step further, by showing students the advantages of solar energy.

In most cities and towns, the local schools drive the sense of community. How many college towns come together for Homecoming? How many water towers are painted with the high school’s colors? How many pro-school signs are in front yards during election season? 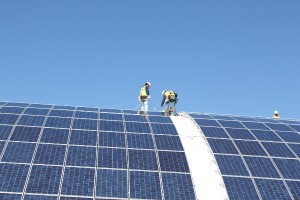 COMING OUT ON TOP: Standard Solar fits an 850-kW system on the University of Delaware’s barrel-shaped field house.

Just as communities support their schools and the futures of their students, educational institutions have an influential role to fill as well. Lately, schools have become supporters of the green movement, teaching students — and the community — a better way to live every day.

Standard Solar, a national distributed generation solar company based in Maryland, also sees its role in communities as an educational force, building solar systems for schools and building community understanding of a renewable technology.

“We’re strong believers in moving the industry as a whole forward. I think the key to doing that is education,” says Scott Wiater, Standard Solar president. “People still view solar as black magic. It’s a proven technology that’s been around for a long time, and we just need to get that word out. The more you can educate people on that, the better off the industry will be.”

Standard Solar, incorporated in 2004, is involved with government and educational institutions for most of its installs. While cost savings are a huge factor in turning to solar, Wiater says most of Standard’s customers do it to be leaders in the community.

“We’ve had customers that are purely an economic decision; they get the benefit of the positive PR and the environmental benefits,” Wiater says. “There are others that are doing it more for the environmental statement and being good stewards of the economy, leading by example mindset. It’s a good mix. At the end of the day though, typically we have to show savings to the school to make the project move forward.” 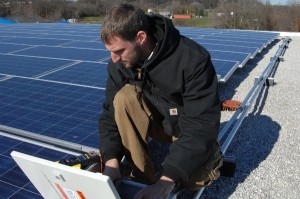 UP AND RUNNING: A Standard Solar employee checks an installation at Catholic University. The PV array is designed to power LED garage lighting.

“The green aspect is becoming much more important to the higher education institutions,” he says. “They all have pretty much some kind of carbon reduction plan and they get graded on that, so we can help them achieve their goals by going solar and usually save them money on their electricity by doing so.”

Standard is active in perfecting the ways of educating today’s youth for a future in the solar industry. Guest lectures at the elementary level on up to university are a large part of the company’s focus. Standard officials help with developing PV or solar curriculum for higher education institutions and assist professors if they have issues. The company has also donated panels for lab work to give students an up-close look at solar power and trains community college students for installation jobs.

“For some of the universities that we’ve installed solar on, we have brought on interns and it’s beneficial both ways,” Wiater says. “They’ve been a great asset to us. And we help them with their intern program and taught their folks a little more about the industry.”

The educational assistance isn’t just on a higher educational level. Standard recently installed a ground- and roof-mounted system, along with an outdoor shade structure, at George Washington Carver Elementary School in St. Mary’s County, Md. The shade structure acts as a solar learning lab with an attached tracker system. High school students are
able to use the lab in a more hands-on nature, taking advantage of the engineering and statistical data to solve problems. 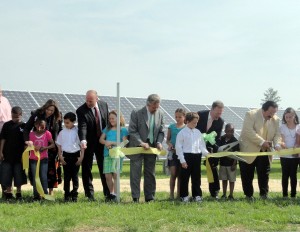 EMPOWERING TODAY’S YOUTH: The ribbon is cut on the 510-kW installation at George Washington Carver Elementary in Maryland. The school also has a learning lab for real-life educational opportunities.

Kiosk systems are always installed in the school lobby or another central location to provide colorful examples of what the installed system offsets. In one school, Standard compares the electricity being generated to how many crabs you could boil or how many light bulbs you could light.

Standard Solar views educational institutions as a valuable path for the company.

“The trend we’re seeing, the universities that we’ve put solar on are coming to us now to put more solar on,” Wiater says, adding that both Catholic University and American University have come back for round two or three. “I think it’s great repeat business for us, and we’re going to continue to build that relationship with the schools.”

Overall, Standard believes the future of the industry lies in the hands of today’s youth.

“We’re very focused on the education,” Wiater says. “You have the education aspect where if you can educate the next generation, then it will be more widely accepted.”