Even the smallest installations can make a big difference.

SunWize Technologies Inc. of San Jose, Calif., takes working with water districts one step further. Not a lot of land? No problem. Just use the reservoir roof.

The solar distributor and installation company has worked with water districts on four different projects over the last few years, including one in Lakewood, Calif. 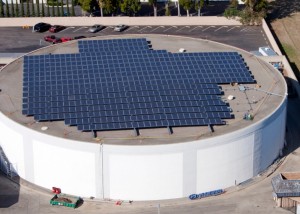 “We’ve always seen demand there,” says Matt Ziskin, senior director of marketing, of water districts. “The main reason is that they have such extensive expenses associated with water pumping. That’s a lot of their expenses, and solar is a great way to help offset those costs.”

The Lakewood project was sought out by City Light & Power, a utility infrastructure solution developer, which was contracted by the City of Lakewood to meet the city’s green goals calling for greenhouse gas reduction and sustainable use of natural resources. It was decided a large solar electric system would be built on top of the Department of Water Resources’ 5-million gallon reservoir.

“[The city] had the space available and we had the technology to meet all the requirements in terms of not putting any penetrations in the tank and meeting weight requirements, so they opted with this solution,” Ziskin says.

SunWize installed 1,342 Sunpower solar panels atop the reservoir, using a non-penetrating ballasted system. It powers 300-hp pumps that operate during peak demand time. The 282-kW system is estimated to save the city $48,000 each year.

There is even the possibility of making money off of a solar power system.

Similar installations to Lakewood’s were completed by SunWize at other water districts in Southern California — a minimally attached 138-kW reservoir rooftop system in Cerritos, a non-penetrating ballasted 30-kW reservoir rooftop system in Indio and a 126-kW ballasted ground-mount system in Corona. All of these water districts are taking necessary steps to combat against increasing electricity rates. 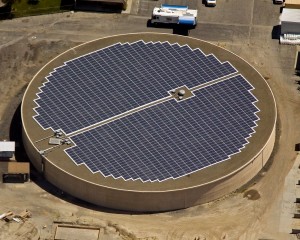 “After the system has essentially paid for itself, electricity rates continue to increase,” Ziskin says. “Even as the system gets older, it’s still generating electricity, and the value of that electricity is higher in the future. Rates are continually increasing. As these rates continue to increase, that’s an increase in costs to the water district; there’s nothing they can do about it. Solar is a way to hedge against that.”

Any way a water district can reduce its costs will help it become more cost effective for customers, which can be a big difference for everyone involved.